For humans and animals alike, relationships are best when they are equal. Corals are one of the best examples of a partnership in nature, though climate change may be souring their relationship beyond repair. Given the crucial role that corals play in forming and maintaining diverse and healthy coral reefs, understanding how and why this break up occurs is essential for preserving reefs for the years to come.

Coral reefs are some of the most biodiverse ecosystems on the planet, supporting nearly a quarter of the world’s marine species, despite covering less than 1% of the Earth’s surface. Though they look like rocks to the average observer, the corals that create these massive reefs are living organisms. These animals create skeletons out of calcium carbonate (the same material as limestone or chalk) covered with a thin layer of tissue, and the product of their efforts makes them one of the few organisms on the planet who create structures that can be seen from space (Figure 1). 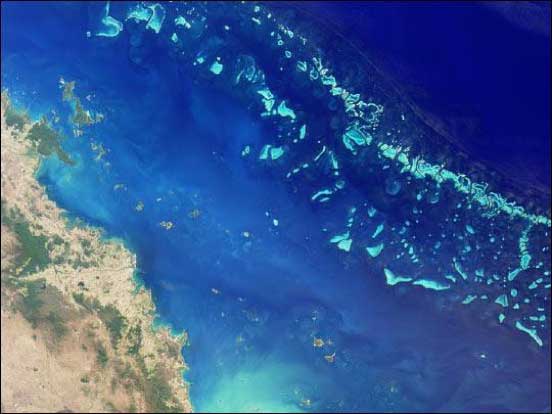 Many coral species on reefs around the globe are also a part of a very special partnership with a single- celled photosynthetic marine alga in the genus Symbiodinium. Colloquially referred to as zooxanthellae, the symbiodinium live within the thin layer of tissue on the outside of coral skeletons, giving them the colors that we see on healthy coral reefs (Figure 2).

Generally speaking, any relationship where organisms live in close relation with each other is called a symbiosis. But, whether this relationship is positive, negative, or neutral for each organism involved can vary. The symbiosis between corals and zooxanthellae is supposed to be mutualistic, meaning that they both receive positive benefits from their partnership. Zooxanthellae are provided with a safe place to live within the coral tissue, and they also get to use the coral’s waste products as nutrients to power photosynthesis. The corals, in turn, receive energy in the form of sugars as products of the zooxanthellae’s photosynthesis, providing close to 90% of their energy.

Figure 2: A coral with individual polyps visible (left) and a close-up of two translucent coral polyps with zooxanthellae (the patches of brown; right). Photos: Coral Reef Alliance and Smithsonian Institution.

Like a good business deal, the two partners do better together than they would alone. The symbiosis between corals and zooxanthellae has allowed for corals to grow so successfully in tropical waters that are otherwise very nutrient- and food-poor. Without this partnership, coral reefs would not be the prolific ecosystems we see and rely on today.

However, as is true for humans, stress can cause a strain on a relationship. This is no different for corals and zooxanthellae, whose main source of stress in the past few decades has been rising ocean temperatures resulting from human additions of carbon dioxide to the atmosphere. At temperatures just ~1°C above mean summer values, the stress becomes too much, and a breakup occurs. During this breakup, referred to as coral bleaching, the corals expel their symbiotic algae, leaving behind the white coral skeleton covered by the now colorless tissue layer (Figure 3). Though some corals are able to regain their zooxanthellae once favorable conditions return, most corals die soon after bleaching occurs as they cannot feed themselves sufficiently without the symbiosis. 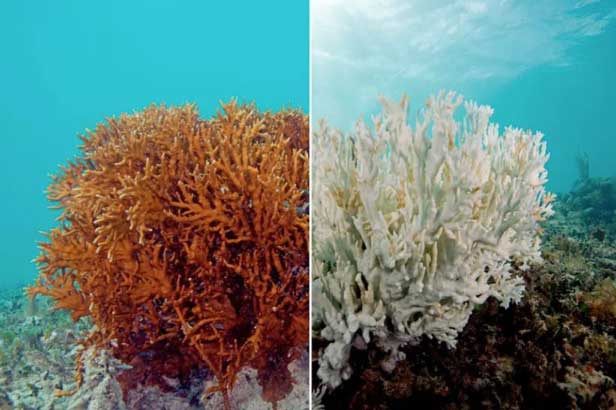 For coral researchers, one of the main issues we face in addressing the problem of coral bleaching is truly understanding the cause and mechanism of the bleaching itself. Some have hypothesized that bleaching occurs when the thermal tolerance of corals and zooxanthellae is exceeded, whereas others suggest that damage to the zooxanthellae’s photosynthetic system releases compounds that are toxic to the corals, leading to an http://www.publish.csiro.au/MF/MF99078  expelling the algae.

In an article published in Nature’s ISME Journal this year, Dr. David Baker of the University of Hong Kong and colleagues provide evidence to suggest that under warming conditions, zooxanthellae actually become parasitic to corals, leading to their expulsion. This imbalance in the relationship is compounded when the corals are exposed to high nutrient concentrations, mimicking those that occur as a result of runoff and pollution from land.

The team measured respiration and growth in colonies of the coral Orbicella faveolata and their zooxanthellae from Belize in nutrient-enriched aquariums at temperatures both below and above the bleaching threshold. By using a combination of chemical isotopes to trace the uptake of nutrients and carbon, they were able to determine the effects of these stressors on the balance of the symbiotic relationship.

They found that while the corals experienced higher energy demands under higher temperatures, the zooxanthellae actually performed better – without any energy cost. When this occurs, the benefits of the symbiosis with zooxanthellae were exceeded by the costs to corals, and the mutualistic relationship became effectively parasitic. In addition, nutrient addition proved to benefit the zooxanthellae only, enhancing their growth exclusively, without sharing their enhanced resources with their hosts.

The results of this study suggest that as sea surface temperatures continue to rise, in concert with increased nutrient loading, corals will become increasingly selfish, leading to widespread coral bleaching.

Reports of massive bleaching events worldwide have been featured on the front pages of popular media outlets increasingly over the last few years. The 2014-2017 Global Coral Bleaching event affected more reefs than any previous bleaching event, and may have been the most severe event on record. In the Hawaiian Islands, between 32 and 56% of all corals bleached, and in Australia’s Great Barrier Reef, bleaching of more than 60% of all corals led to announcements that the world’s largest reef had died.

While some reports took a turn for the dramatic, there is no question that coral bleaching is happening, and will continue to occur unless we as humans change our habits. The large loss of corals has dramatic consequences, not only for the ecosystem itself, but also for humans. In addition to facilitating healthy fisheries which feed billions of people worldwide, coral reefs also dissipate wave energy, protecting coastlines and preventing erosion, and contain chemicals important for many pharmaceuticals, among many other ecosystem services. Thus, the loss of corals from bleaching (in addition to other causes such as trawling, ocean acidification, disease, and sedimentation) will have significant ecological and economic effects.

If coral scientists can understand the mechanism by which coral bleaching occurs, then we can more effectively work to prevent it in the future, or at least remedy the relationship before mass coral mortality occurs.