A scientific paper published on February 8, 2018, in Scientific Reports, details the 2015 discovery and research of external egg cases belonging to the deep-sea skate species, Bathyraja spinosissima (think: cartilaginous fish related to sting rays and sharks), nestled within close range of a hydrothermal vent system. This location and discovery occurred at the Iguana-Pinguinos hydrothermal vent site, a little over a mile below the ocean’s surface in the Galapagos Rift. The team of international scientists who made the discovery were puzzled, to say the least. These scientists knew that similar egg-incubating behavior had been recorded in Cretaceous sauropod dinosaurs and the rare avian megapode, who both used volcanically heated nesting grounds to incubate their eggs, but this discovery would be the first time that scientists would witness this incubation behavior in the marine environment. This unique behavior would give scientists information not only pertaining to the behavior of one of the deepest-living sea skate species, but also to the hydrothermal vent ecosystem in which they were utilizing.

What Exactly are Hydrothermal Vents??

Deep-sea hydrothermal vent ecosystems were discovered in 1977 and can be compared to geysers, or hot springs, that span the ocean floor. Tectonic plates spread apart along the mid-ocean ridges and magma rises and cools to form new crust and volcanic mountain chains. Deep within the ocean’s crust, seawater circulates and becomes heated by the hot magma. Pressure builds, the seawater warms, and the minerals within dissolve and rise to the crust’s surface. The hot, mineral-rich water exits the ocean’s crust and cools the seawater above. As the vent minerals cool, they solidify into mineral deposits and form different vent structures which are characterized by their physical and chemical factors, like temperature, minerals and their plumes. The hottest, darkest plumes are known as black smokers, which will be mentioned again regarding the discovery of the Bathyraja spinosissima’s egg cases. Hydrothermal vent ecosystems have challenged many scientists’ views of how marine ecosystems function and even today, over forty years after their initial discovery, hydrothermal vents are still revealing unique biological and chemical processes as they interact with their surrounding environments; they have even proved to influence global geochemical cycles. Hydrothermal vents are the largest biome on Earth, but are one of the least studied ecosystems on the planet, mainly due to the fact that they are not as easily accessible as coral reefs where one would leisurely snorkel and/or dive or tide pools, next to a public beach, where countless, colorful sea creatures are wading. These hydrothermal vent ecosystems are found in the deepest and darkest depths of the ocean – most at depths of a few miles beneath the surface, far out of the reach of divers or snorkelers. In order locate and study these unique ecosystems, it takes a team of scientists skilled in operating remotely operated vehicles (ROVs) or other varieties of unmanned underwater vehicles (UUVs); it also takes time and money. The Iguana-Pinguinos hydrothermal vent site where the egg cases of the Bathyraja spinosissima were found, is located at the Galapagos Rift, part of the Galapagos Platform in the eastern Pacific, approximately 1,000km west of the coast of Ecuador. This area consists of 13 major volcanic islands, which are the famous Galapagos Islands, and also many seamounts. This particular hydrothermal vent system is approximately 1,670m to 1,690m in depth – a little more than a mile below the ocean’s surface. Creatures that live at these depths have evolved to do so. As previously mentioned, the physical and chemical factors paired with cold, dark, and nutrient-poor conditions, make this an extremely harsh environment to live in. The discovery and study of this deep-sea skate species further proves that there is a direct link between the animals that live in this environment and how they have successfully adapted to endure rough environmental conditions and maybe even conditions that are not so natural.

In June 2015, on a 10-day collaborative research cruise, scientists began exploring the seafloor using the ROV systems Argus and Hercules, each outfitted with an HD color video camera. The ROV landed on a ridge, which is an underwater mountain system, in the Galapagos Rift. Scientists had come to this area to specifically study the hydrothermal vent ecosystem but when they panned the ROV-mounted camera downward, they noticed something they did not expect to see: egg cases (as seen below). These egg cases, also called mermaid purses, were quite abundant 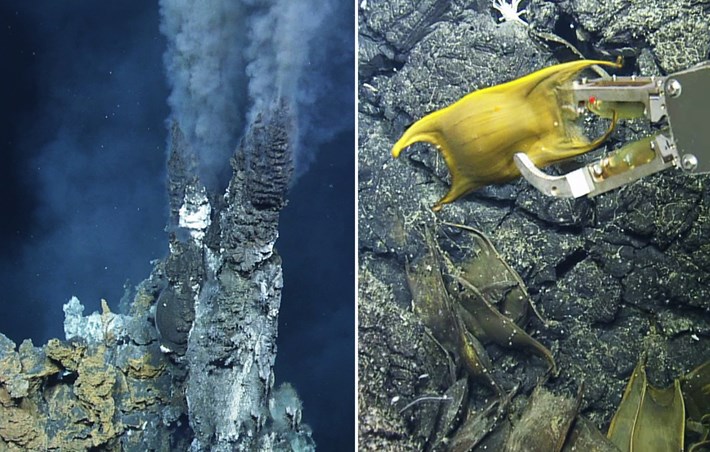 in the area of view and scientists concluded that whatever was laying them had to have been using this specific site for many years, intentionally returning to it to lay their eggs. As scientists continued to scan and research the area, they continued finding the same egg cases, 157 to be exact, and concluded that this was not just one animal but the behavior of many individuals of the same species. How did they find out “who” the culprit was and “why” the odd behavior of laying egg cases near the hot, hydrothermal vents? The ROVs collected four egg cases and once they were safely brought aboard the research vessel, scientists carefully opened them to sample for molecular analysis. DNA analysis revealed that these egg cases belonged to the species Bathyraja spinosissima, one of the deepest-living sea skates but not usually known to have their egg cases in such close proximity of the vents – black smokers, to be more specific! Scientists discovered that the majority of the cases were found within 65ft of the chimney-like black smokers, which are the hottest hydrothermal vents, as aforementioned. Temperatures here can reach almost 500°! Almost 90% of egg cases found were in places where the water surrounding the vents was hotter than average. Ultimately, scientists concluded that this “strange” behavior was really an adaptive behavior to reduce incubation time. Deep-sea skates are known to have one of the longest incubation times in the animal kingdom, several years to be exact, and that this particular species was utilizing the warm water around the hydrothermal vents to decrease the amount of incubation time. But why?

Why Care About the State of the Deep-Sea Skate?

Through this discovery and research, scientists concluded that the Bathyraja spinosissimaspecies of deep-sea skate are utilizing the hydrothermal vent ecosystems as a symbiont to reduce their incubation times as they may be becoming sensitive to changes in the environment in which they inhabit. Deep-sea fishing and trawling, deep-sea mining and other natural resource exploration are inducing changes that are extensively damaging and even destroying the seafloor. Understanding the dynamics of these hydrothermal vent systems, even though they may seem “out of sight, out of mind,” may be absolutely necessary in the next steps of conservation efforts for the deep-sea and hydrothermal vent ecosystems, especially since technology for resource exploration and extraction on the ocean floor is rapidly advancing. Charles Fisher, Professor and Distinguished Senior Scholar of Biology at Penn State and an author of one of the papers referenced stated, “The deep sea is full of surprises. I’ve made hundreds of dives, both in person and virtually, to deep-sea hydrothermal vents and have never seen anything like this.” Perhaps “this,” should be deemed not just as the discovery of a unique, altered behavior of a species but also as a call-for-attention to an area of the sea where changes in the environment are imminent and that the species living there are adapting as best they can in hopes to survive anthropogenic impacts. Although a delicate creature half a world away, Bathyraja spinosissima may be telling scientists, researchers, and conservationists, through their altered behavior, that it is time to start asking questions and taking action: What can be done to mitigate these issues, especially with the advancement in deep-sea mining, mineral exploration and extraction? Are species in other benthic ecosystems that are witnessing anthropogenic threats also exhibiting adaptive behavior to changes in their environment? Even though it seems that the deep-sea skate species is exhibiting a behavior that may increase its likelihood of survival what will happen to this species if their hydrothermal vent ecosystem were to disappear completely because of anthropogenic impacts? Could they adapt then?