When people think of the Arctic, the first thing that comes to mind is probably a polar bear sitting on a piece of ever-shrinking ice. News about polar regions is rarely good, especially when it comes to scientific discoveries—we hear that the ice is diminishing, that the animals are losing habitat, and that rapid change is occurring. While all of these are true, there’s more to our polar climates than meets the eye. The Arctic Ocean is home to the polar bear, but it’s also home to a rich diversity of species that live in deeper water and along the ocean bottom. A recent paper on the Canadian Arctic by Anni Makela and her colleagues at University of Aberdeen in the United Kingdom suggests that in some of these benthic habitats, diversity and productivity will be maintained and possibly even increase as the Arctic warms and sea ice is lost.

Map of the Canadian Arctic, showing the locations of satudy for Makela et al (5).

Benthic habitats are those that sit along the ocean floor. The world of benthic organisms is very different from ours, but at a basic level they need the same thing we do to survive: food. Much of this food is provided via phytoplankton that live in the surface ocean and require sunlight and nutrients to create energy (termed ‘primary productivity’) through photosynthesis, like many of the land plants we’re more familiar with. When phytoplankton sink down to the ocean floor, they become food for benthic species.

The more food a habitat receives, the greater number of individuals and species it can support (one measure of biodiversity). And in general, the greater biodiversity of a system, the better the chance of its survival.

Systems with greater productivity also usually have shorter food chains. Most people are familiar with the idea of a food chain—the grass creates energy via sunlight and nutrients, the rabbit eats the grass, and the wolf eats the rabbit. What’s less familiar is that the energy transferred diminishes with each consumer (i.e. at each “trophic level”). The rabbit doesn’t receive all of the energy created by the grass; the wolf receives even less. For this reason, shorter food chains often mean more energy reaches the animals we usually think about, such as fish, mammals, and sea birds.

In terms of benthic food sources, the Arctic ocean is a special case—here, much of the surface water is covered in ice, which limits the light phytoplankton receive. This makes it more difficult for them to create energy. For this reason, areas of open water (‘polynyas’) are particularly productive. But there is another piece to this puzzle, which has sparked debate over Arctic benthic systems. Sinking algae that lives on the bottom of the sea ice can also be an important source of food for benthic animals. This begs the question, which is more important for a diverse, productive benthic system? The open water, or the sea ice?

In 2017, Anni Makaela and her colleagues published a paper focused on two open water polynyas in the Arctic Ocean: the North Water Polynya (NOW), which is the biggest and most productive polynya in the northern hemisphere, and the Lancaster Sound Polynya (LS), which is smaller and where sea ice (and associated algae) was previously supposed to contribute more to the diets of benthic species. Both polynyas occur in deep sea sites, which have not been studied as often as coastal/more shallow locations. In their study, these scientists found that benthic organisms in both systems depended mostly on phytoplankton for their food, and that sea ice algae was a prevalent food source only for very mobile organisms who could easily get to it (it falls irregularly to the ocean floor).

The NOW polynya supported a wider range of organisms and shorter trophic chains than the LS polynya, and both were more productive than expected. This suggests that, at least in some cases, deep benthic habitats can be even more productive than their shallow counterparts!

The study also found that the smaller polynya was dominated by bivalves (clams, mussels, mollusks) whereas the larger was dominated by crustaceans (crabs, lobsters). They predicted that this was mainly due to differences in current speed—bivalves feed by straining food out of the water, and faster currents aid this process. In some cases, species fed on different prey at each of the two polynyas, which suggests an ability to adjust to changes (i.e., resilience in the face of the changing Arctic Ocean).

What does it all mean?

With global warming, the Arctic Ocean is one of the fastest evolving environments on our planet. Some models predict it will be free of summer ice entirely as soon as 2040. Though this will have major negative impacts on many Arctic species, this study suggests that benthic organisms may reap a positive benefit from increased open water. Additionally, these deep water systems being even more productive than previous studies suggested may change our understanding of the relationship between ocean depth and productivity (it has generally been supposed that the deeper the benthic habitat, the less productive).

How do we study Arctic benthic habitats…

This study provided one of the first examinations of the benthic ecosystem structure for a deep ocean Arctic polynya—but how did the scientists manage it?

To determine what species were at their sites, the authors took large sediment cores. This is a process that involves the removal of a chunk of the ocean floor, which can then be brought back to the lab and examined to determine the number and species of animals present.

To study the food chains and dependence of the organisms on sea ice algae/phytoplankton, this study used stable isotope analysis. This complex process is not so difficult to understand as its name suggests. Essentially, it works through the idea of “you are what you eat” by using carbon and nitrogen to trace the path of food chains through organisms. The ratio of carbon isotopes (carbon atoms with different numbers of neutrons) remains consistent as you travel up a food chain and allows scientists to identify the original food source. In contrast, the ratio of nitrogen isotopes changes at each trophic level. Combining these two via a process called mixed modelling makes it possible to construct food chains and food webs (interconnected food chains) that show who eats who, and at what trophic level.

…and why do we care?

As nice as it is to hear a positive climate change effect, this story is, at its base, about an ocean that most of us will never go to, about organisms that we rarely think of, in depths that we couldn’t survive at. You might think, how could something so remote be connected to my life?

But it is. Many of the Arctic species whose survival we are invested in, such as gray whales and walruses, rely on food from benthic ecosystems like the ones studied in this paper. Arctic sea birds an 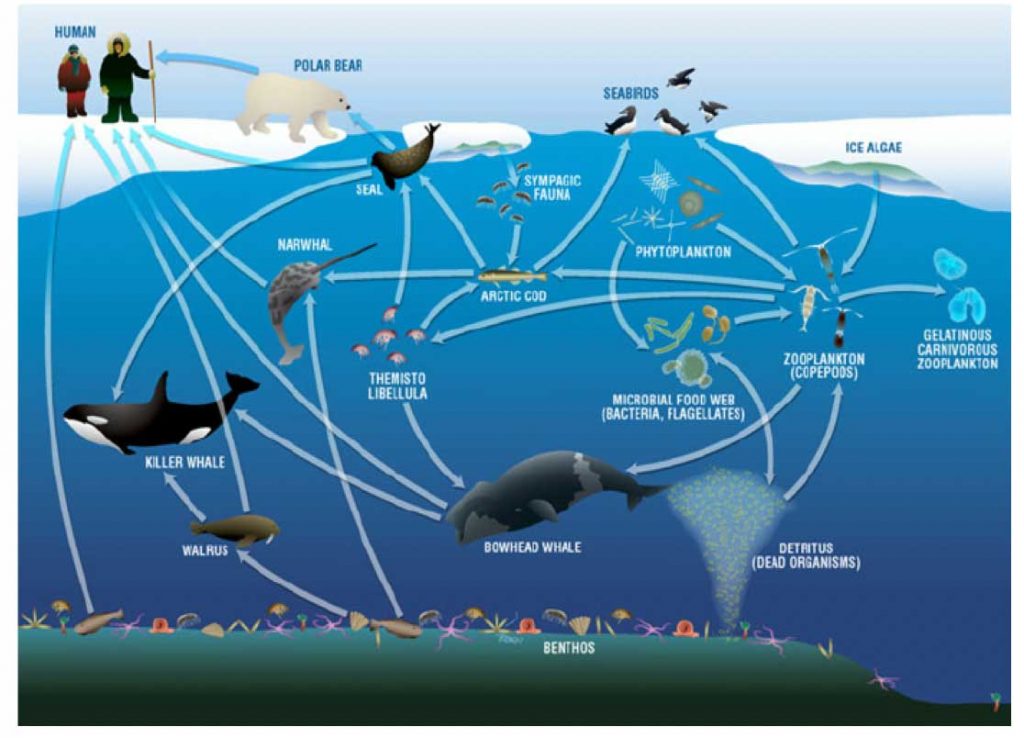 A general marine Arctic food web, courtesy of Darnis et al. (2)Facebook pages and laptop backgrounds, will be successful in their changing habitat, it at least may lighten some of their burden.

And that’s how a story that at first seems interesting, but on the whole unimportant, can in fact have a great impact. As the sea ice melts, these polynyas grow larger and potentially more productive and diverse. In this way they provide a feasting ground for many of the species we’re invested in. As food chains shorten, more energy will reach higher trophic levels, where organisms such as the walrus and the polar bear sit. While this isn’t enough to suggest that the animals we care about, the ones whose videos fill our Facebook pages and laptop backgrounds, will be successful in their changing habitat, it at least may lighten some of their burden.

The ocean feeds us, too

Several Arctic fish species that people consume, especially Arctic peoples, rely on benthic production. As the ocean current changes, the LS polynya could no longer support bivalves and might instead support mostly crustaceans. It’s hard to say what the ramifications of this are but understanding them is important for marine Arctic species and the diets of people both in the Arctic and worldwide.

Hardly the end of the story

Makela and her colleagues made some interesting discoveries, but there’s still much that hasn’t been uncovered. Though I mentioned that the future may mean less bivalves (bad news for the organisms that eat them), this study hasn’t concluded whether shifts like this may occur. The authors focused on summer conditions, while in truth, conditions in other seasons are equally important—it’s possible sea ice may play a greater role in non-summer months. Studying the deep ocean remains difficult, and there are still questions about what we might see in other spots of the deep Arctic, especially ones that have been historically less productive. As nice as it is to hear that the Arctic benthos may be benefitting from the loss of sea ice, further study is required to say whether or not this is the case on a larger scale.

Other factors besides ice come into play as well. Temperature, salinity, and ocean mixing rates can all affect productivity levels. It’s important to get the whole story before we can make the claim that Arctic production may increase with climate change, and that some ecosystems will reap a positive benefit from global warming.

For today, at least, I’ll take the win.