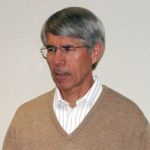 Michael Tillman is a CMBC non-resident Research Associate working on marine wildlife conservation issues.  Appointed in June 2010 by President Obama, he currently serves on the Marine Mammal Commission. He is a former career senior executive at the National Marine Fisheries Service, having served in Washington, DC as the agency’s first Chief Scientist and its Deputy Director, and finishing his federal career as Director of the Southwest Fisheries Science Center in La Jolla, CA.  His extensive experience in international marine conservation includes Presidential appointments as the Deputy U.S. Commissioner to the International Whaling Commission  (IWC) and U.S. Commissioner to the Inter-American Tropical Tuna Commission.  He has received numerous awards during his career, including the Presidential Rank Award of Meritorious Service for sustained excellence in supporting U.S. goals of protecting whales internationally and recovering protected species domestically, the prestigious Animal Welfare Institute’s Albert Schweitzer Medal for whale conservation efforts and three Department of Commerce Bronze Medals for outstanding contributions to international marine resource management.

A Vietnam era veteran and member of the Tlingit Indian Tribe of Southeast Alaska, he received his Ph.D. in fisheries science with a minor in natural resource economics from the University of Washington in 1972.