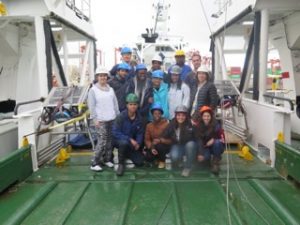 “Deep Secrets” is a project of the multi-disciplinary African Coelacanth Ecosystem Programme, catalyzed through a joint initiative with the Oceans and Coast Branch of the Department of Environmental Affairs and the Department of Science and Technology facilitated through the Presidential Operation Phakisa Oceans Economy Laboratory. The project and expedition was led by the Principal Investigator, Dr Kerry Sink, a scientist at the South African National Biodiversity Institute. One of the key project goals is to develop deepsea research capacity across multiple institutions and as such the expedition included staff from nine of the fifteen organizations collaborating on the project. These include the Oceans and Coasts Branch of the Department of Environmental Affairs, the South African National Biodiversity Institute, the South African Institute for Aquatic Biodiversity, the South African Environmental Observation Network, Nelson Mandela Metropolitan University, the University of Cape Town, the University of the Western Cape, Eastern Cape Parks and Tourism and Scripps Institution of Oceanography in California. Research goals focused on characterizing different habitats in the outer shelf, shelf edge and slope to inform management and spatial planning in South Africa’s ocean. This includes the development of offshore Marine Protected Areas (MPAs) and the implementation of Marine Spatial Planning, a process to optimally zone the increasing number of activities in the sea. 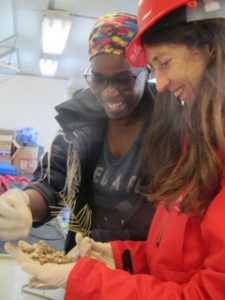 Kerry Sink and scientist Zoleka Filander examine corals collected at the newly discovered Secret Reef, a reef composed of many years of coral growth on the shelf edge off Knysna

Highlights of the expedition include the first photographs of deep water coral ecosystems in South Africa, new live coral specimens for further research, the discovery of the potential role of soft corals as fish nurseries and first observations of some fish and invertebrates in their natural deep water habitats. Areas of future research were identified including understanding the effects of climate change on deep water coral habitats and the impact of demersal trawling on deep-sea ecosystems. Next week, the team will return to their laboratories to analyze specimens, video, images, bathymetry and oceanographic data collected in the field. New student projects will also be developed offering exciting research opportunities for other young scientists to work with the Deep Secrets team in 2017 and beyond.

The cruise was hosted aboard the Department of Environment’s Research Vessel Algoa. The sampling undertaken was designed to understand different aspects of the marine environment. Echo-sounder surveys were conducted to examine features on the seafloor, particularly submarine canyons, offshore ridges, deep reefs and thousands of year old mounds made by cold water corals. Although museum records indicated the presence of reef building corals in deep water, such habitats have never been observed in South Africa before now. Biodiversity sampling included deep water camera surveys and many specimens were collected using a sled (towed sampling device) and a grab (steel jaws that take a bite out of the seabed). The biodiversity samples provided specimens so scientists can identify and count animals seen in photographs and video and examine the small creatures that live within seabed sediments. They will also be used for genetic barcoding and in studies to characterize the foodweb and understand energy flow. Innovative plankton sampling was also done using nets attached to the tow camera. Oceanographic sampling provided measurements of sea temperature, oxygen and the pH of the water which varies with depth and region. Such information is critical to help understand climate change sensitivity and impacts which must be factored into spatial ocean management. 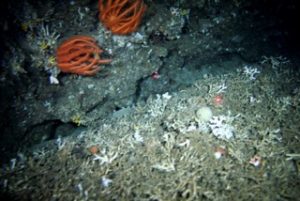 The findings of the cruise were extensive with over 3000 seabed images, many gigs of video footage and more than 600 biodiversity samples. A steep coral encrusted rocky ridge on the slope off Port Elizabeth, submarine canyons in the Amathole area and coral habitats at Browns Bank on the west coast are some the key undocumented features that were investigated by the team. “We were amazed at the complexity and variability in seabed ecosystems” said Sink reflecting on “the mosaic of sandy habitats, the diversity on gravel slopes, the strange creatures captured in the Agulhas muds and the beauty and fragility of the deep coral ecosystems”. Some of the more surprising finds included a garden of gia 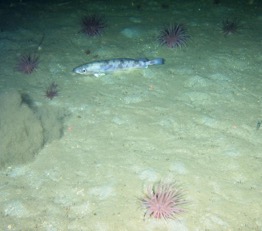 nt pink sea anemones off Port Elizabeth, kingklip in sandy burrows off Kenton and the presence of fish eggs and larvae in the fronds of soft corals across the study area. The latter discovery indicates that coral habitats may serve a nursery function for fish and the team is excited to learn the identity of the fish species involved. The expedition covered seven of the 21 new proposed Phakisa MPAs, providing the first images in five of these areas and contributing baseline information to inform MPA implementation and management. Fortuitously, a port stop provided an opportunity to engage with fisheries stakeholders during a fuel stop and together with further radio communication at sea, this helped raise awareness and build understanding of the interaction between trawlers and south coast rock lobster fishers and cold water coral habitats.

The journey was not easy with a number of challenges such as equipment failure, contending with severe weather and port delays while trying to achieve project goals and pioneer new sampling approaches. Achievements could not have been realized without the skill of the navigating officers, capable technicians and dedicated crew aboard the vessel. Deep sea lectures were held to compliment the practical experience gained by the team with international collaborator Professor Lisa Levin (Scripps Institution of Oceanography) sharing scientific knowledge and application with links to the Deep Ocean Stewardship Initiative (DOSI).