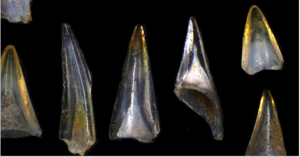 To support our work on deep sea fish, we have created an “Ichthyolith Taxonomy Database”—a photographic catalog of fish teeth from the SIO and Smithsonian fish collections that we are using to identify fossil teeth in marine sediments. We have published several papers using this database, notably Sibert and Norris (2015) PNAS that showed the ecological recovery of open ocean fish after the Cretaceous-Paleogene mass extinction. This work is also making extensive use of the facilities and core collection in the SIO Geological Collections and the SIO Marine Vertebrates Collection.

In reef systems, we have been reconstructing the history of fish populations, corals, urchins, sponges and foraminifera in coastal reefs in Panama and Belize for the past ~1000 years, using the rich fossil record and archeological history of these environments. Work on the cored materials involves a collaboration between paleontologists, reef ecologists, fish biologists, and archeologists from SIO, the Smithsonian Tropical Research Institution, We have found that particularly abundant teeth in reef sediments are those of parrot fish, whose grazing activities maintain healthy corals by suppressing the growth of algae. Notably, parrot fishes began to decline in abundance on Panamanian reefs in the late 1800’s about the same time that these reefs began to shift toward the “weedy” species that characterize modern reefs in the area. The reconstruction of parrot fish abundance is proving to be an important indicator of reef health and our “Paleo” studies are proving adept at providing targets for parrot fish conservation. Indeed, Belize recently passed a ban on fishing parrot fish, precisely to protect their reefs from further decline.

Researcher Katie Cramer and the molluscs used in the study.