San Diego County is home to a wide range of terrestrial and marine ecosystems found in the vast deserts, on the forested mountains, in the coastal kelp forests, and deep in the submarine canyons.  Caught in the middle of the physical clash between land and sea is the highly dynamic ecosystem of the rocky intertidal zone.  Here, the sudden break of a wave on the rising tide can rapidly alter the ambient temperature, salt content and serenity of a small animal’s habitat.  Curiosity about the organisms that can survive such harsh and quickly changing conditions draws us to the shore for a closer look.

This look at Bird Rock in La Jolla, one of the many tide pool destinations in San Diego, California was created by 2008 MAS-MBC Graduate J.J. Newman as a visually document of the biodiversity seen at Bird Rock from February through May, 2008.

Newman’s data has been edited to focus on efforts to minimize human impacts to this environment during a visit to Bird Rock. 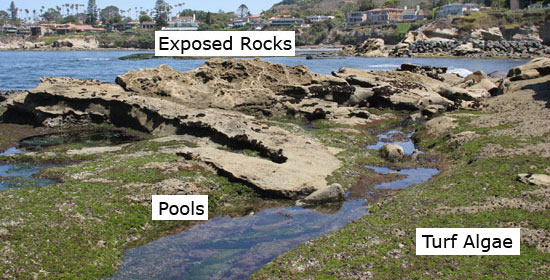 Human impacts on the intertidal zone are generally a direct result of trampling or collecting.  Other effects occur indirectly through urban runoff.  Specific advice for the intertidal zone at Bird Rock can help keep animals alive and knowing why it’s important to lessen our impact can make it easier to do. 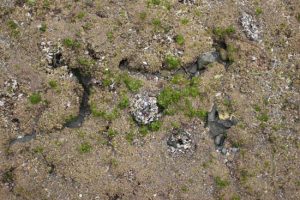 Tread lightly –  Sea anemones at Bird Rock tend to live on the algal turf within ten or so yards of the boulders on shore. When the tide recedes and the anemones are exposed, they pull in their tentacles and close up into a small mass of jelly. To protect against drying out, anemones have small pieces of rock and shell stuck to their outer layer so once they have closed up, they are very difficult to see and therefore quite easy to step on.

Snails, limpets, mussels and barnacles that live on exposed rocks face the basic threat of being crushed if we step from boulder to boulder without looking or we walk on Bird Rock without noticing the animals dispersed across its surface. Keep an eye on where your feet are headed before they get there and you are likely to save one of these:

Just when we think we are safe from causing harm as we walk across the flat slabs of rock covered with the algal turf, it turns out that in a small patch of turf – a few square inches – live hundreds of small animals. Some of these animals are smaller than ants and others are the size of a dime. From the perspective of these organisms, their algal habitat is very much like a forest and home to hundreds of animal species.

Hermit crabs face two problems: first, they are easy to catch and pick up, which can be a fun experience for tide pool explorers; and second, they occur in high concentrations in some areas of Bird Rock. Holding a hermit crab in a wet hand and gently putting it back in its home pool should pose no real threat to this entertaining animal. However, being dropped from a height, relocated to a different pool or put in a bucket and taken home can cause varying levels of disruption or harm to a hermit crab. When found in high concentrations, as happens close to the actual Bird Rock where many football-sized rocks make up the terrain, hermit crabs can be hard to avoid underfoot and the telltale crunch will be your first indication you might try to find a new route.

escape after being caught by a predator. Though this loss of limb won’t necessarily kill the animals directly, it can make them less fit for survival until the leg has grown back. If an up-close look is desired, try shooing the animal into a clean container with water in it for a short period of time and then be sure to set it free close to where you found it.

Value to the Ecosystem: Biodiversity

The value of an organism – or even a species – to humans can be hard to determine, the value of that organism or species to its community can be quite high, and even critical to the survival of the ecosystem. Each organism fills a role in its immediate habitat; the byproduct of its attempts at survival benefits other members of the ecosystem. Some are producers (algae) and provide a base food source as well as protection from the sun and predators. Some are detritivores or scavengers and consume organic waste converting minerals and nutrients into a useable form for other organisms. Some are herbivores and help clear space on rocks for others to settle and live. Some are carnivores and help other organisms from overpopulating and destroying the habitat. In a strong ecosystem with high biodiversity, members of different species overlap in each niche so if one organism and its adaptations aren’t sufficient for survival under given conditions, an alternately equipped organism may have better luck and the secondary service to the ecosystem is maintained.

As a casual or first-time visitor to any ecosystem, it’s a good idea to do as little damage as possible.