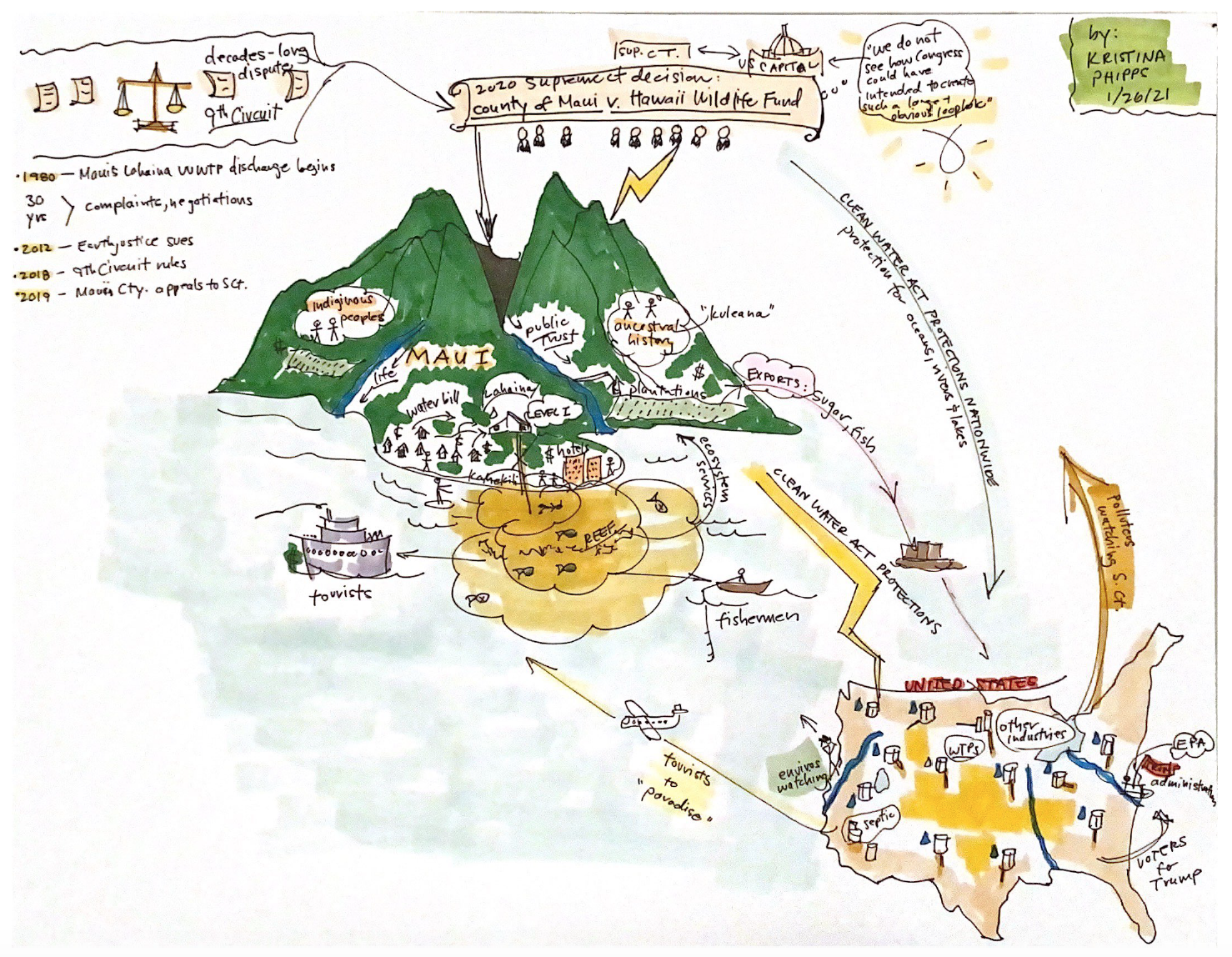 Illustration "rich picture" depicting the sewage issue on Maui helps us understand interrelationships and complexity in a system, to see an issue from many perspectives. Who, and what, influences decisions and solutions; and who is left out?  Illustration courtesy Challenge participant Kristina Phipps.

Moving from Blindspots to Innovation when Tackling Plastic Pollution

The Scripps-Rady Ocean Plastic Pollution Challenge participants have been challenged to think on a “systems” level about the issue of marine plastic pollution. What is systems thinking? Systems thinking is a more holistic way to seeing the world, making connections and relationships more visible. It moves away from simple good vs. bad or powerful vs. powerless ways of thinking, and instead strives to illuminate the rich complexity of players, incentives, leverage points, and dynamics within a given system or problem.

The recent course on this topic was moderated by Dr. Eleanor Sterling, Jaffe Chief Conservation Scientist at the American Museum of Natural History’s Center for Biodiversity and Conservation, who has over 30 years of field research and capacity development experience in Africa, Asia, Latin America, and Oceania. Eleanor was joined by co-facilitator Erin Betley, Biodiversity Specialist at the Center for Biodiversity and Conservation at the American Museum of Natural History, and co-facilitator Dr. Jennifer Smith, Professor at the Scripps Institution of Oceanography, University of California, San Diego.

In a paper currently in press, Dr. Sterling and Betley describe the complexity of systems thinking: “The key for systems thinking is that it is NOT about prediction or control, but about raising more questions to enhance understanding and seeking opportunities to ‘nudge’ system function in desired directions. Systems thinking helps with seeing that there is frequently not one single solution to a problem, but a set of coordinated actions that guide the system towards a desired state or outcome.”

One of the first steps in systems thinking when considering a particular issue is asking, “Who are the stakeholders? Who are all the parties at the table?” Using the example of a wastewater treatment plant releasing sewage into wells that leaked into the ocean on the island of Maui, on which Dr. Smith is an expert, Dr. Sterling, Betley and Dr. Smith walked the Challenge participants through an activity of identifying all the stakeholders involved in that issue and their respective levels of power to influence the sewage issue.

Although the Challenge participants collectively identified most of the stakeholders in the Maui sewage issue, they still left several out of the equation. Dr. Sterling pushed the Challenge participants to think more broadly and more critically. “Should all stakeholders be at the table? No, then you wouldn’t get anywhere. But who are the most important? Who can prevent solutions from moving forward? Sometimes there are silent stakeholders; ones you don’t think of at the beginning of an initiative,” said Dr. Sterling.

Challenge participant, Steven Wright, Co-Director 4Walls International, raised the issue of power. “Isn’t it its own feedback loop if we only bring those with power to make change to the table? Shouldn’t we be including those that have been excluded from power?” he asked. Dr. Sterling  agreed and suggested that forming coalitions can give power and a louder voice to those who traditionally may not have had a seat at the table. Challenge participant, Kristina Phipps, Independent Legal and Policy Consultant, remarked, “I found the stakeholder assessment exercise to be a fabulous tool for not only brainstorming potential stakeholders, but also identifying potential stakeholder alliances and dynamics.”

Challenge participant Fawn Liebengood, Founder and Executive Director, Blue Ocean Warriors, agreed that stakeholder alliances could aid those without as much power, but also added, “I think part of the struggle is having some groups realize they’re a stakeholder in the first place and then figuring out how to convince them to take action.” This is of particular concern with the problem of plastic pollution, where many stakeholders do not see a direct, personal cost of the plastic pollution they create. The plastic industry has no legal responsibility for the fate of their undegradable products after being used by a consumer, so why should they care if 800 species of marine animals to date have been documented ingesting marine plastic debris? Many wealthy nations export their plastic waste to less wealthy nations, so they don’t have to see the blight of eternal plastic covering the landscape and shorelines. When you or I buy something new encased in plastic packaging, we don’t have to take valuable time or pay the price to figure out where to stash that plastic packaging for the rest of eternity.

Dr. Sterling, Betley, and Dr. Smith took Challenge participants through another exercise to induce systems-thinking, creating “rich pictures,” or unstructured visual descriptions of a system, using the Maui-sewage issue as a model. Rich pictures are used to understand interrelationships and complexity in a system, to see an issue from many perspectives, and to determine leverage points for possible change. Dr. Smith pointed out that Challenge participants revealed their background and biases by showing more detail in their rich pictures in one area, such as the biophysical system, or the social/legal/political systems. As Challenge participant Colin Duncan, Product Development Lead at Forever Wild Seafood, pointed out, “It is an interesting tool for sussing out one’s one blindspots.”

"We have to rethink what we think" - Dr. Eleanor Sterling

Dr. Sterling said that being able to see our blindspots is a huge advantage. “There is a perspective that we have to break out of to really see the whole system. We have to rethink what we think. Rich pictures or mental maps will help us see if someone has a completely different vision of what we are seeing,” said Dr. Sterling. Betley added, “A tweak in one part of the system might affect a part you never thought about. As more perspectives are added, the more complex it becomes.”

Acknowledging that plastic pollution is an incredibly complex problem with a multitude of different stakeholders will be the starting point for the Challenge participants. Dr. Sterling told participants that they “will never find A solution to this issue.” Solutions will need to be systemic, multi-faceted, and multi-pronged. As the Challenge participants began to discuss a systems thinking approach to plastic pollution, Dr. Sterling and Betley offered some advice, “Remember there are often multiple perspectives on a problem; and while you may see a clockwise circle, someone else very well might see a counter-clockwise circle. A systems thinker sees value in a diversity of perspectives in that they can strengthen approaches to leverage change in a system.”  Dr. Smith optimistically added, “And that is where the innovation comes in.”

Co-Leaders of the Challenge---Stuart Sandin, Professor and Director of the Center for Marine Biodiversity and Conservation at Scripps Institution of Oceanography, UC San Diego and Ayelet Gneezy, Professor of Behavioral Sciences and Marketing, the Center for Social Innovation and Impact at the Rady School of Management, UC San Diego---knew that a diversity of perspectives would be key to unraveling the insidious problem of plastic pollution that has infiltrated all aspects of human life. The participants will challenge each other to acknowledge their own biases, to look at plastic pollution from new perspectives, to identify previously unknown coalitions of similar interests, and to find leverage points. Only together will they learn to rethink what they think. 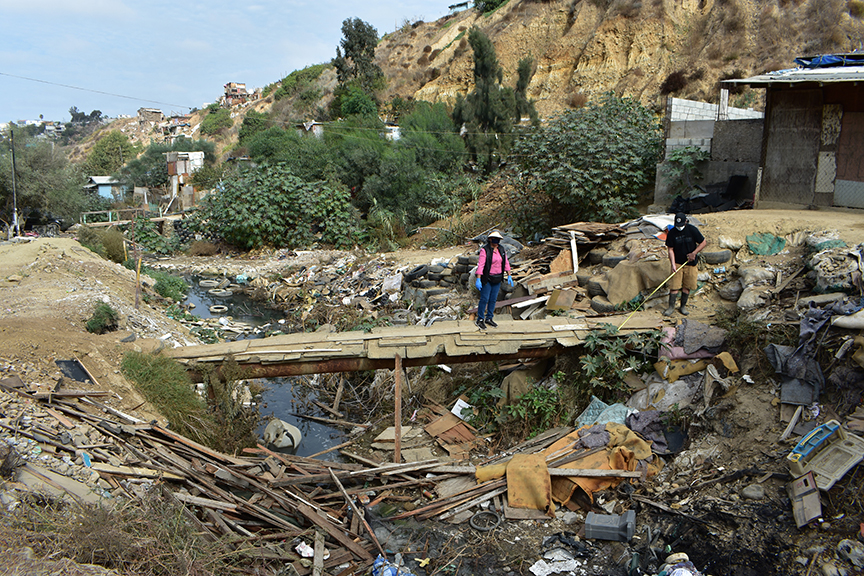