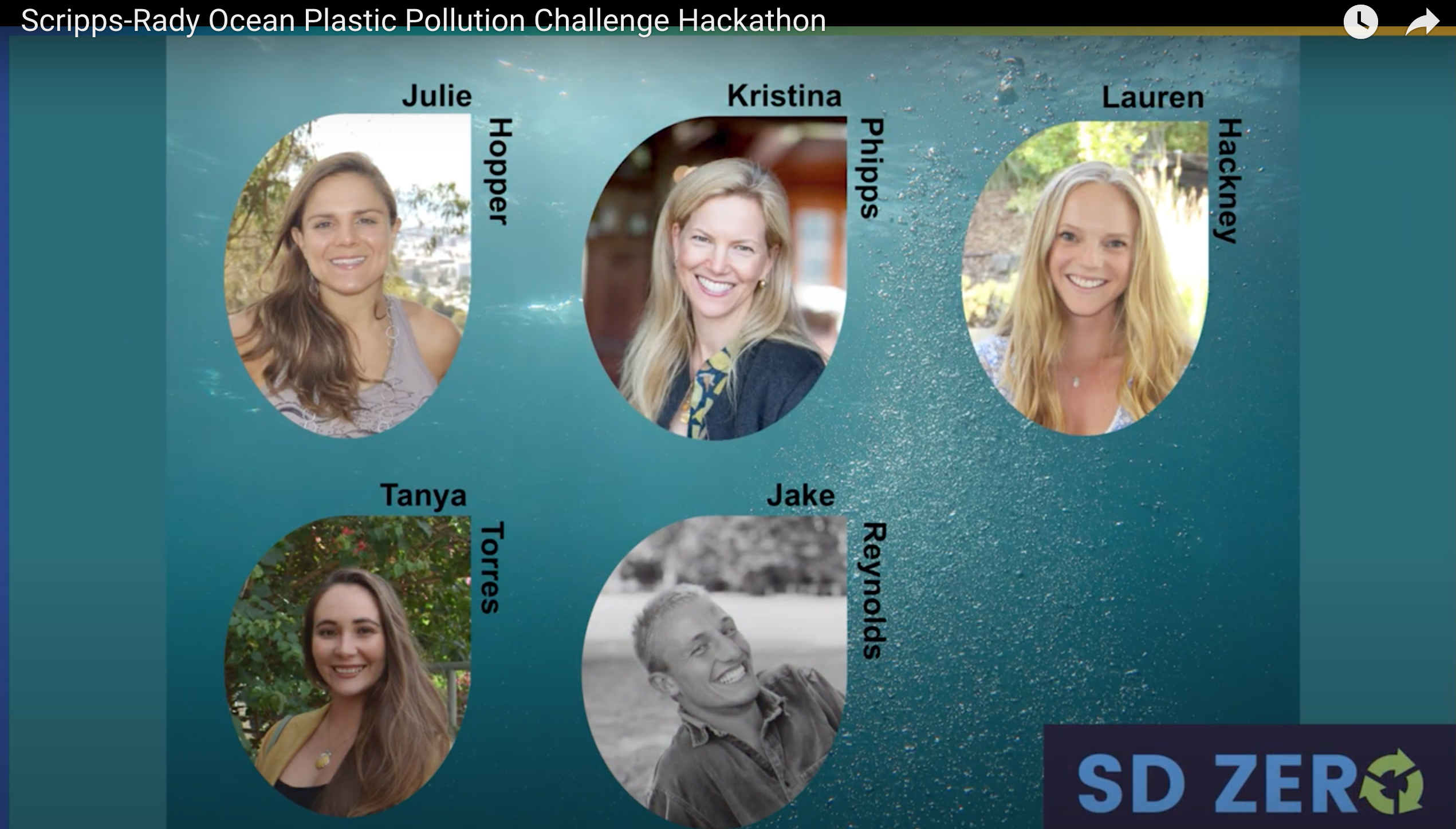 All journeys, especially maiden voyages, involve risk. Even when the maps are ready, the course is set, the crew is prepared, and the hold is full of supplies, there still is the risk of unknowns. In a way, the inaugural Scripps-Rady Ocean Plastic Pollution Challenge (Challenge) has felt like a maiden voyage. The partnership between Scripps Institution of Oceanography and the UC San Diego Rady School of Management was a new model for approaching an environmental problem. The course was unchartered territory, and with that came the risk that the program might not reach the intended destination. However, we all know that the greatest rewards often come from the journeys with the most risk.

Over the course of the past six months, 29 participants have worked together through a series of short courses and team-based research to tackle the problem of ocean plastic pollution. On June 6-8, 2021, the Challenge concluded with an intense 48 hour “hackathon” event and public finale (finale video). The participants were divided into five teams, balanced by experience and expertise. The teams were given the charge to come up with a new proposal that would curb the flow of plastic into Southern California’s coastal ocean. The proposals could be anything, such as a new coalition, a marketing plan, a business plan, a program, a behavioral change incentive, a new technology, or a policy change.

Due to covid restrictions on in-person meetings, the hackathon and public finale were held virtually. The teams each had members in a range of time zones, with at least one member of each team on a more than 9 hour time difference. Needless to say, the technological acrobatics and communication skills exhibited by the teams between noon on June 6 Pacific time and 2:00 pm June 8 would impress any multinational business communications team.

The teams were judged by a high profile set of 11 judges. The proposals were evaluated on their feasibility, identification of obstacles, impact, efficacy, timeline, funding plan and ability to apply a systems approach. The decision was not easy for the judges, who deliberated up until the final moments. In the live public finale with over 200 viewers from 27 countries, the judges announced the winner of the Scripps-Rady Ocean Plastic Pollution Challenge: Team “SD Zero,” with members Julie Hopper, Jake Reynolds, Lauren Hackney, Kristina Phipps, and Tanya Torres! The SDZero proposal included a policy change for the city of San Diego that prohibits single use plastics at large events through the leverage of event permitting.

Dr. Gwen Nero, lead judge and Director, Outreach & Innovation, Scripps Institution of Oceanography, UC San Diego announced “SDZero” as the winner. “Your proposal was elegant,” she said. “You proposed a policy change that aligns with existing municipal goals and provides the city a phased process to put their plastic waste goals into a reality.”

Dr. Radhika Malpali, one of the judges and Former Senior Engineering Director at Google, commented on the winning proposal. “I love how all your data points automatically lead us to your conclusion. I love how you talked through the potential obstacles and thought of ways to deal with them, and used the behavior theory that you learned.”

The ability of the team to break out of their respective professional silos and employ the systems thinking they learned earlier in the program was apparent. Winning team member, Kristina Phipps, commented, “I thought this was a super example of interdisciplinary group thinking at work. Our team was really well composed in that we all came with different expertise....I found it really satisfying from a personal and professional standpoint to experience that sense of collaborative crafting and creativity that happened in the last 48 hours.” Winning team member and Rady MBA candidate, Lauren Hackney, added, “we are so honored to be part of this program.”

After congratulating the winning team, Professor Stuart Sandin, Co-Director of the Challenge and Director of the Center for Marine Biodiversity and Conservation at Scripps, reminded the audience and all the participants about the value of all of the proposals. “One winner had to be selected today, but if one, two or five of these ideas can go forward, then we are all winners. The ocean offshore of California will be a better place.” Dr. Sandin added, “as Dr. Winnie Lau of PEW reminded us many times during this challenge, there are ultimately going to have to be many working solutions for us to keep a problem as big as ocean plastic pollution at bay.”

Second place went to Team “Plastic Free SD,” with members Kara Wiggin, Ozlem Tetik, Jules Jackson, Jonathan Goodmacher, and Hilary Haskell. Their proposal is an overarching coalition that brings together all the stakeholders -- NGOs, the government, educational institutions, businesses, and consumers -- to utilize the cumulative knowledge. Challenge judge and City of Imperial Beach Councilwoman, Paloma Aguirre, commented, “I’m so glad that San Diego has so many leaders in this space.”

Dr. Eleanor Sterling, Challenge judge and Jaffe Chief Conservation Scientist at the American Museum of Natural History’s Center for Biodiversity and Conservation, had positive comments for Team “Plastic Patrol,” with members Colin Duncan, Lisa Gilfillan, Elizabeth Plascencia, Aubrie Fowler, Sarah Fischbach, and Cleo Stratmann.  “Youth activism is a fundamental piece on the globe today, and this initiative really builds off the global phenomenon, in particular youth engagement in environmental activism.” Dr. Sterling added, “I like that the team emphasized equity and diversity issues.”

Dr. Benjamin Maurer, Challenge judge and Senior Engineer at National Renewable Energy Laboratory gave positive feedback to Team “Trash Alert,” with members Nicholas Carver, Chiara Dorigo, Matthew Noto, Fadwa Bouhedda, and Anna Robuck. “It was encouraging to see you approach this from a hardware-based, very clever architecture...I think there is a real value proposition there for municipalities who want to cut down their costs while better servicing their citizens.”

The Scripps-Rady Ocean Plastic Pollution Challenge’s maiden voyage was successful. Ayelet Gneezy, Challenge-Coordinator and Professor of behavioral sciences and marketing with the Center for Social Innovation and Impact at the Rady School of Management, UC San Diego, concluded the live public program by looking toward the future. “I hope it helped instill a belief in everyone here today of how important it is to approach problems, especially complex problems, with a complex approach, and an interdisciplinary approach.”

Professor Stuart Sandin, was aware of the risks of leading a new program on a new course to a somewhat unknown destination. “This was a first effort to bring Scripps and Rady together into a cross-disciplinary program of such scope and scale,” he said. Yet, like most involved in this maiden voyage, Dr. Sandin is confident that the Challenge has reached its destination. “It was an experiment,” said Dr. Sandin, “and I would like to say this is an experiment that succeeded.”

Not only did this inaugural Scripps-Rady Challenge deliver some new creative solutions to help curb the flow of plastic into the ocean of Southern California, but it charted a course that now can be followed. There is now a blueprint for an accelerator-like, interdisciplinary, systems-approach to solve complex environmental problems. This maiden voyage has proven that the journey is possible. Now, let’s keep sailing.

To watch each team pitch their proposals and see the winning team's reaction, view the finale video!

To learn more about the Challenge, Participants, Judges and Proposals: https://cmbc.ucsd.edu/plastic-challenge-2021/ 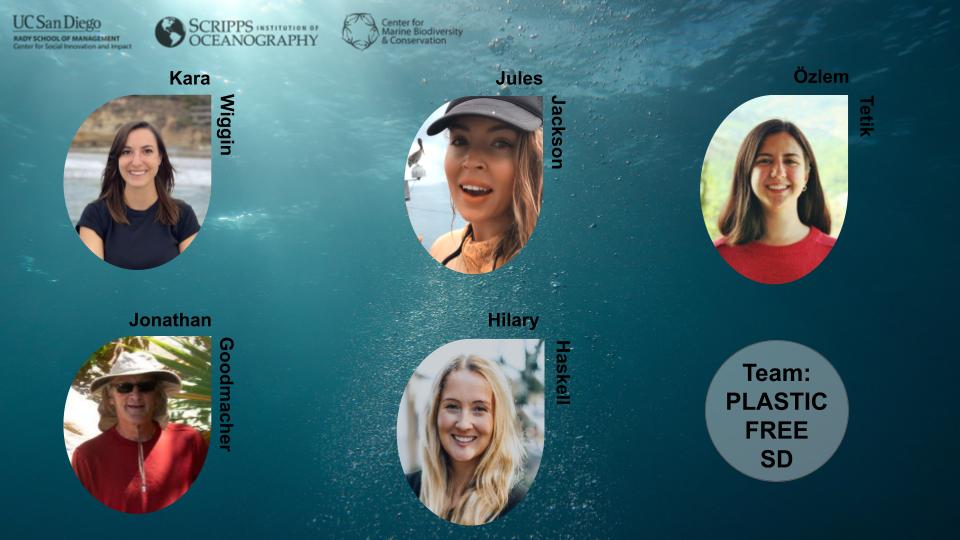 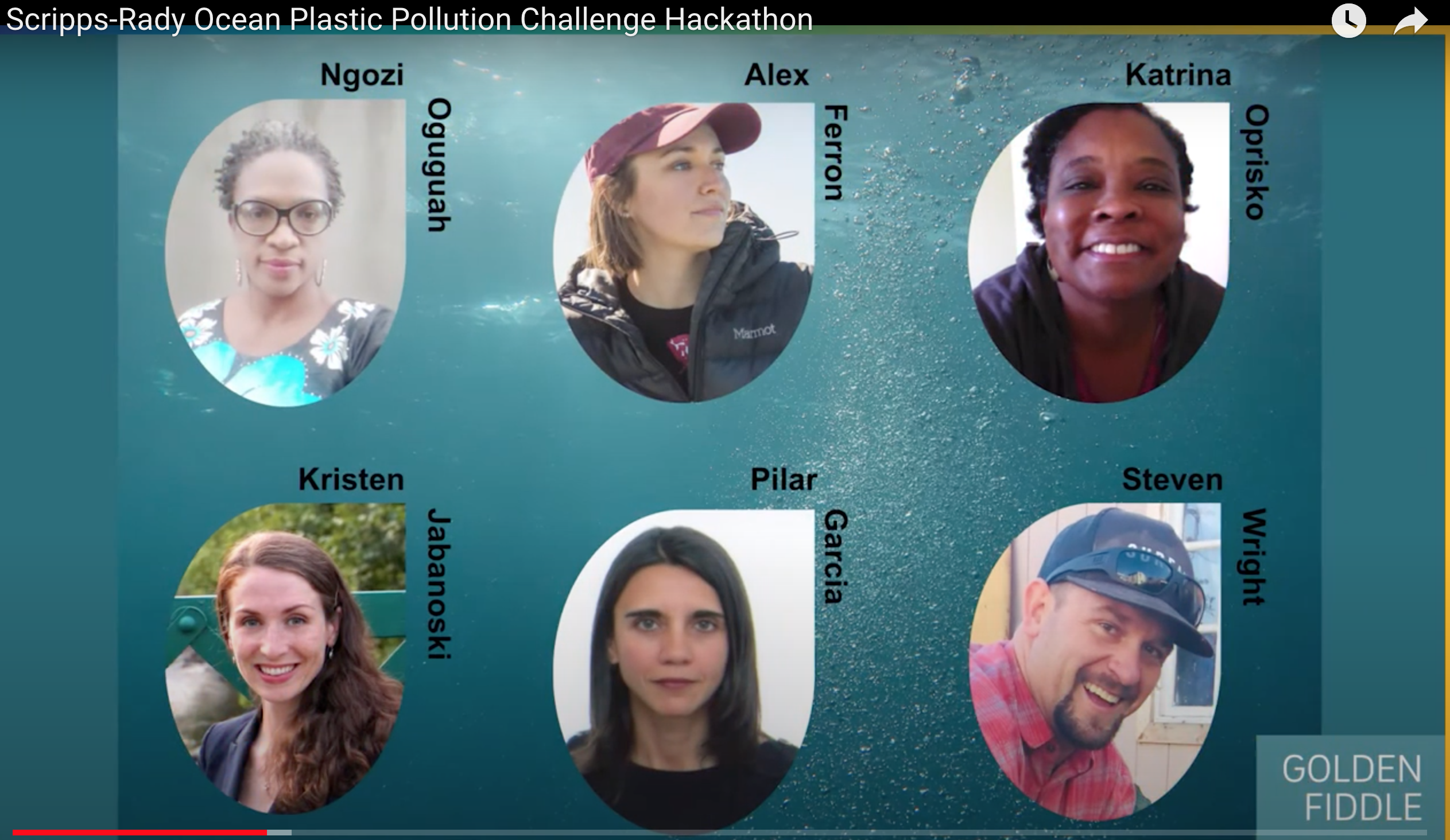 Team Golden Fiddle is a Finalist! 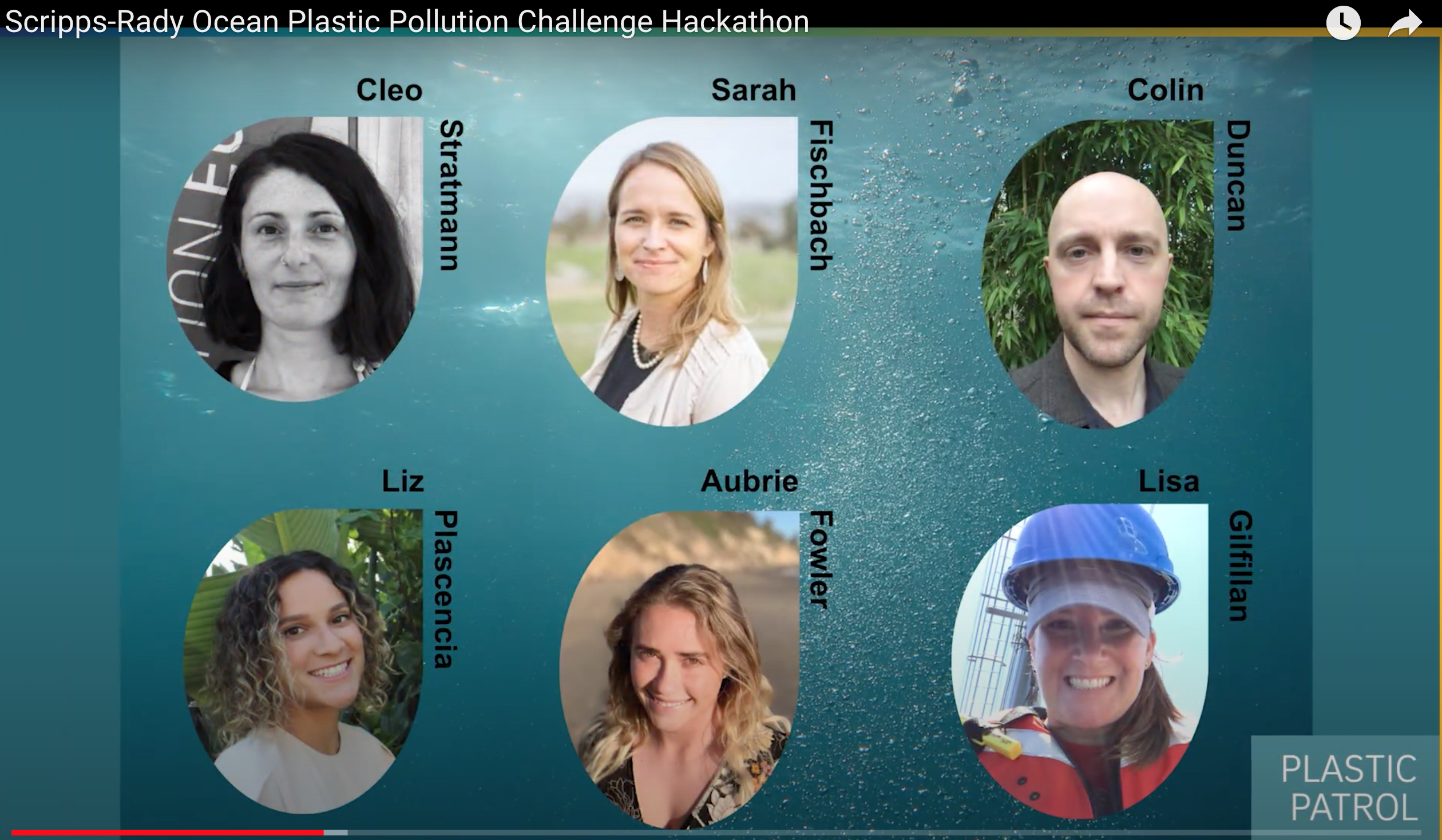 Team Plastic Patrol is a Finalist! 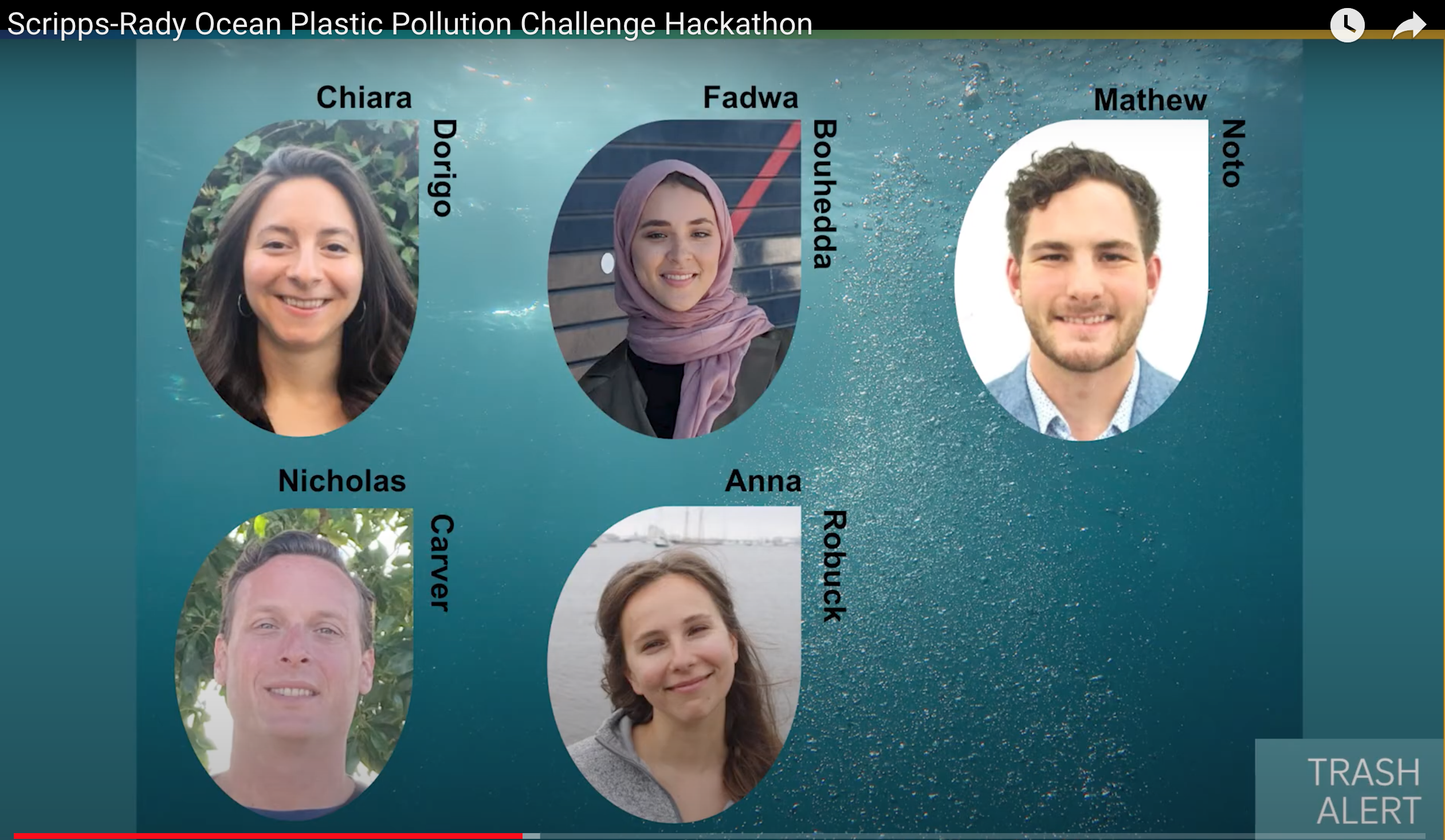 Team Trash Alert is a Finalist!