Coastal ecosystems are suffering rapid decline and increased degradation as a result of human disturbances. Finding successful solutions for conserving and protecting important habitats is critical. Formerly perceived as coastal ‘wastelands’, salt marshes are one of the most underappreciated coastal systems. In addition to housing a wide variety of flora and fauna, salt marshes are extremely productive coastal systems that serve as a barrier between land and sea. Extremely vulnerable to human activity, tidal marshes are in trouble and efforts worldwide have ramped up to stave decline. Restoration, or returning habitats back to a healthy condition, is a promising yet challenging method used for conserving salt marshes. Successful restoration requires effective initial rehabilitation of the habitat and long-term persistence, stability, and resiliency in the face of future natural and human disturbances. Restoration isn’t always successful and attempts could result in partial recovery or complete failure, where restored conditions do not match those of natural marshes. A new study might have found the key to amplifying salt marsh restoration success; fostering mutual interactions between species.

What Are Salt Marshes?

Why Are Salt Marshes Important?

Salt marshes provide a wealth of services, referred to as ecosystem services that make them extremely valuable habitats to conserve. Salt marshes serve as nursery habitats for a variety of marine life, including more than 75 percent of fishery species. Wading birds feed in these productive habitats while migratory birds use salt marshes as stopping points on their routes. Salt marshes serve as a buffer between land and sea, filtering nutrients, run-off, and heavy metals, even shielding coastal areas from storm surge, flood, and erosion. These transitional ecosystems are also vital in combating climate change by sequestering carbon in our atmosphere.

What Natural and Anthropogenic Disturbances Do Salt Marshes Face?

Salt marshes occupy prime coastal real estate sharing the shoreline with around 10 percent of the world’s population or nearly 600 million people, according to the United Nations. This makes marshes extremely prone to human disturbances, especially habitat loss seen from land reclamation for urban development and agriculture. Being surrounded by these areas leads to an influx of nutrients in the form of sewage, agricultural run-off, and industrial waste.

Enrichment by excess nutrients causes shift in vegetation structure and provides non-native organisms the opportunity to invade and thrive in salt marshes. Invasive species like the common reed in Narragansett Bay, outcompete indigenous reeds and marsh grasses eventually leading to decline of wildlife and plant diversity, species abundance, and in the worst-case scenario, extinction,

Overfishing is often also blamed for degradation of salt marsh habitats. Loss of top predators like cod, striped bass, and blue crabs has been linked to collapse of salt marshes. With top predators being commercially and recreationally fished out, voracious herbivores like marsh crabs take over and destroy cordgrass, an essential wetland plant. The consumers who are being overfished play an important role in regulating these communities and removing them out of a system could lead to its collapse.

Climate change, and associated sea level rise, also negatively affect salt marshes. Distribution of plants and animals within marshes are based on various factors, especially tolerance of specific organisms to salinity and wetness. Temporary or permanent flooding from sea level rise could drown certain plants, not giving them enough time to move further inland in order to survive, and lead to erosion of the marsh into open water.

How Can We Conserve Salt Marshes? 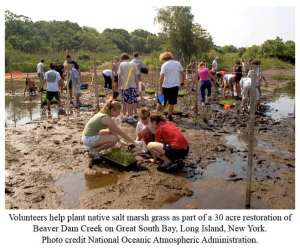 As salt marshes are reinterpreted, their ecosystem services become better understood.  This results in an increase of conservation efforts to the tune of 1 billion US$ worldwide. Efforts include proper management of existing marshes, introduction of legislation to protect ecologically important habitats, reduction of intense development along the coast, and restoration of damaged marshes.

Two ideologies exist when considering options for restoring salt marshes.  One option acknowledges that humans have done enough damage. Perhaps habitats are better off with no additional anthropogenic interference and only require time and space to recover naturally. The second option emphasizes restoring degraded habitats back to their natural state.  Restoration efforts include removing non-native species, removing dikes, levees, etc. to restore natural tidal influences, and establishment of a single foundation species to facilitate the return of natural biodiversity. Although great in theory, restoration is logistically difficult, expensive, labor- intensive, and not always successful.

So, What Is the Key to Restoration Success?

Positive interactions are relationships between different species that result in better growth, reproduction and/or survival for at least one species involved in the interaction without negatively affecting the other species. Several studies have found that positive interactions reduce physical stress and increase resource availability within salt marshes. For example, mussels stabilize and fertilize soil that benefit the cordgrass, a primary foundation species.

Cordgrass traps sediments, creates low-marsh habitats, provides site for mussels to attach, and contribute dead plant matter to their diet. Positive interactions, such as those between mussels and cordgrass, play an important role in the function and stability of marshes. However, consideration of these implications and the potential of harnessing these interactions to improve salt marsh restoration has been limited thus far. In fact, a survey found that only 1 out of 25 restoration agencies in the U.S. considered positive interactions within their restoration design.

A group of scientist from all over the world set out to investigate whether positive interactions between cordgrass and mussels can increase restoration success in degraded U.S. salt marshes. They found that co-transplanted mussels, those transplanted with cordgrass, increased nutrients and reduced sulphide stress for local cordgrass. In return 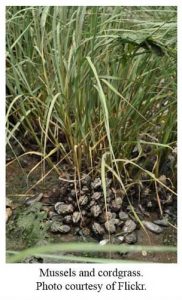 , this increased cordgrass growth and expansion throughout the habitat. Then the scientists simulated a disturbance and removed above-ground vegetation and mussels. They found that co-transplanted cordgrass had three times the survival rate compared to cordgrass that was transplanted without mussels. Not only did co-transplantation enhance cordgrass and mussel growth, it also improved resiliency of the foundation species to disturbance. Overall, the study found that mussels amplified cordgrass recolonization and resilience across broad spatial and temporal scales and utilizing these relationships could improve restoration success.

Integrating positive interactions is a simple yet promising tool to incorporate into restoration design across all coastal ecosystems. This tool has the potential to improve initial restoration success and also long-term resiliency, especially in the face of disturbances that these habitats will no doubt face in coming decades. This study contributed yet another method into the restoration toolbox that managers and policymakers should utilize in conjecture with other established methods to rehabilitate and reconstruct coastal ecosystems.