When discussing food webs and food chains, organisms are categorized into trophic level groups.Trophic levels consist of producers, consumers, detritivores and decomposers (Dunn 1993). Familiar to most of us are examples from land-based ecosystems. Producers- plants, like grasses, make food using photosynthesis. A consumer, like a rabbit, eats the grass and then another level of consumer, a fox, eats the rabbit (Dunn 1993). When the fox dies, detritivores and decomposers, organisms like worms and bacteria that eat non-living things as well as metabolic waste (detritus), decompose the remains of the fox back into the soil. Decomposing the fox remains back into the soil provides nutrients back to the grasses, cycling energy back to the lowest trophic level (Dunn 1993).

In marine systems, particularly coral reef systems, the food webs are more complex than the grass- rabbit-fox example. One reason for this complexity is the high biodiversity of coral reef systems. With a high number of species inhabiting the system like reef-building corals, herbivorous fish, crabs, lobsters, shrimp, sea turtles and sharks, there are more pathways for the transfer of energy through food webs. While we know that coral reef systems support many different species, indicating that nutrient cycling is happening in these systems, scientists haven’t known much about how energy is transferred between the corals and higher trophic levels until now.

This is called “carbon fixing” and makes corals known for being primary producers. Corals release this organic c 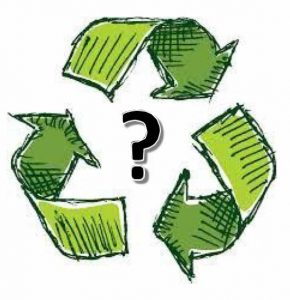 arbon into the surrounding water as dissolved organic matter (DOM) in the form of coral mucus. The mucus, as appetizing as it may sound, is still not accessible in this form as a food source to many reef organisms. So how are the consumers that inhabit these highly productive coral reef systems getting energy from the corals?

Scientists believe that the missing link between corals and higher-level reef consumers is none other than the detritus, or waste, of reef sponges! Reef sponges are organisms made of many cells with pores and channels that allow water to move through their bodies. Sponges can provide food to other organisms through sponge detritus and through predation on the sponge itself (Rix et al. 2018). In addition to sponge-derived food sources, scientists believe that reef sponges take up DOM produced by corals and transform it into detritus which organisms such as worms, crabs, sea stars, snails and fish can consume. Thus, reef sponges are providing a pathway for DOM to get to consumers in higher trophic levels (Rix et al. 2018). 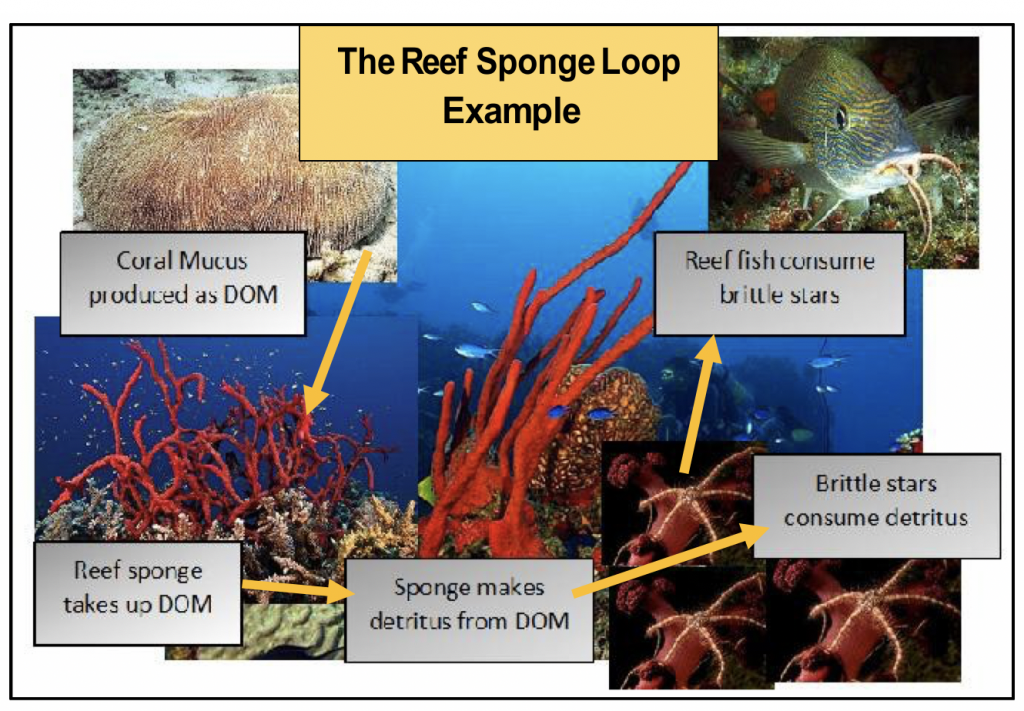 The Search for Answers

To test this idea, scientists completed an experiment using stable isotope tracers. Stable isotope tracers are used to track an isotope through a metabolic pathway (Middleburg 2014). Isotopes are variations of the same element that have the same number of protons but different numbers of neutrons (Stable Isotope Principles 2018). For example, Carbon-12 (12 C) and Carbon-13 (13 C), where 13 C has one more neutron than 12 C. This gives the elements different masses. Both 12 C and 13 C are stable isotopes, which are not radioactive (Levin, class lecture). When an organism, such as a reef worm or fish, consumes its food, it is taking in carbon in several forms. Due to difference in mass, 12 C is metabolized faster than 13 C, so the ratio of 13 C to 12 C in an organism’s tissue differs as trophic level changes (Levin, class lecture). This variation with trophic level change is referred to as a stable isotope signal or signature. Scientists are able to track the signals of these isotopes from the primary producers to the consumers (Middleburg 2014). Organisms that have the same or similar 13 C signatures often share the same primary producer energy source (Levin, class lecture). Going back to our land- based example, this process is akin to testing the tissue of the fox that had consumed the rabbit and being able to determine the location or species of grass that the rabbit had eaten.

In this experiment, scientists “labelled” the test corals with Carbon-13 (13 C ) and Nitrogen-15 (15N), essentially imprinting 13 C and 15N stable isotope signatures into the corals.2 Then, after a matter of days, two species of reef sponges and their associated detritivores- two species of sea worms and one species of brittle sea star- were placed in aquarium tanks connected to the coral tanks (Rix et al. 2018). Both sets of tanks were supplied with a constant flow of fresh-pumped reef water. After several days, stable isotopic analysis was completed on the worms and brittle stars to determine if their tissues had the same 13 C and 15N signatures that was given to the corals.

When stable isotope ratios of the control organisms were compared with those of the experiment organisms, enrichment of 13 C and 15N was detected in the sponge detritivores, the worms and brittle stars, living on the sponges exposed to the labelled corals (Rix et al. 2018). This indicates that the reef sponges processed the coral mucus DOM into sponge detritus which the detritivores then consumed.

Not only was this study able to show that the organic matter produced by corals is transfered up the reef food web by sponges, but it also showed that both encrusting and massive branching sponges participate in this process (Rix et al. 2018). As discussed earlier, reef sponges provide habitat and food to many reef organisms and the results of this study have implications for the ability of reef sponges to be able to provide food to their habitants in times of food shortages. Many reef sponge inhabitants, such as brittle stars, are preyed on by reef fishes, recycling the coral-derived detritus to higher trophic levels (Rix et al. 2018). This upward movement via detritus consumption is an important component in the recycling of primary production which keeps the reef food web moving. Further study is needed to determine if there is a measurable benefit to the reef sponges for providing food and habitat to these organisms (Rix et al. 2018).

As ocean temperatures and chemistry continue to change, some organisms will be affected more than others. It is predicted that coral reefs may be particularly susceptible to warming water temperatures and increased ocean acidity, among other things. As we work to predict and plan for mitigation of these affects, there is still much that is not known about these highly diverse ecosystems. The conclusions of this study highlight the important role that reef sponges play in the reef web and provides a link between the primary producers and the consumers on coral reefs.

1 A food chain is a particular pathway that nutrients (energy) take through trophic levels (hierarchy of levels in an ecosystem). A food web is a compilation of many different food chains interconnecting with one another and including many trophic levels.

2 The nitrogen isotope tracer works similarly to the carbon isotope tracer and allows scientists to determine where an organism resides with regard to trophic level (Middleburg 2014).

Article References: **Indicates publication that this article was based upon