When we think of home, perhaps the first image that comes to mind is not a recycling bin nor an old tire. However, these items can easily become home to many marine animals on the sea floor. How do our plastic goods make their way to the sea floor and what happens to the ecosystems once plastic is introduced? In the following sections, we will address these questions as to how and why plastic becomes a home.

It is hard to imagine a world without plastics, although it came into mass manufacture only a few decades ago in the 1950s. Since then, plastics production has skyrocketed. Ronald Geyer and his colleagues have estimated that 8.3 billion metric tons of plastic has been produced to date, 2.5 billion tons of which are currently in use, such as in construction materials like PVC piping. 600 million metric tons have been recycled and 4.9 billion metric tons have been discarded into a landfill or released into the environment. The plastics that make it into the ocean and to the sea floor are included in the 4.9 billion tons discarded. The 4.9 billion tons in the landfill and environment at the present is the same weight as 15,000 Empire State Buildings or 650 million elephants! 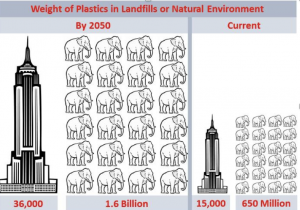 Where, oh where, does the plastic go

The answer is practically everywhere. Plastics get circulated globally from ocean currents. They have been found from the surface waters to the sea floors to the poles. Plastic takes upwards of 500 years to decompose. That means, it has a long lifespan, throughout which it can spread.

Plastic can be broken down into smaller fragments from the sun’s radiation, called UV radiation, and from mechanical wave action, for example. These small plastic bits are called microplastics, and range from the size of nanometers (about the size of a virus) to 5 mm (about the size of a sesame seed). These small bits of plastic include beads from facial scrubs and microscopic fibers from our very clothing. These are easily ingested by marine organisms and by us!

So, how do plastics affect benthic ecosystems?

Marine litter affects the animals that live on or in the soft sedimented (such as sandy) sea floors. In fact, large marine plastics change the community structure of the local soft sediment ecosystem. As an example, a study was conducted in Aegean Sea in which the benthic megafauna, or sea-floor dwelling animals, were surveyed by SCUBA diving scientists for a year. In this study, 16 litter items (12 plastic bottles and 4 glass jars) were placed at SCUBA depth of 20 meters. What the study found was that the total abundance and number of species were highest on the littered plots in comparison to the control in which there was no debris present. On the glass and plastic litter, the scientists noted a large abundance of sessile (non-mobile) organisms, such as sea sponges, barnacles, and tunicates (commonly called “sea squirts”). They also reported a high abundance of mobile animals, such as hermit crabs, sea snails, octopuses, and fish. The non-mobile animals settle on the surface of the litter and formed relationships amongst each other, like competing for space or food, as they filter feed the water for nutrients. Conversely, the litter provided shelter and den opportunities for the mobile creatures. 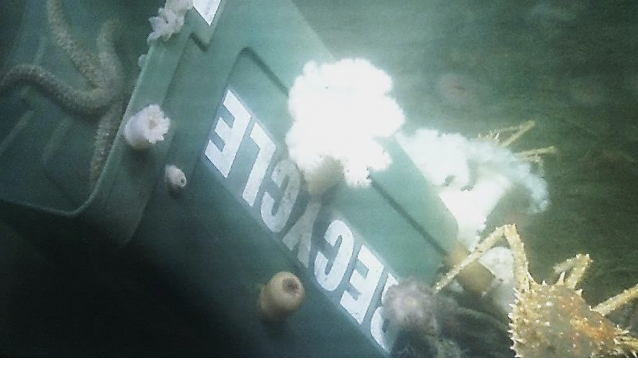 Above: This image I acquired while aboard the Exploration Vessel Nautilus in 2017. We can see that a variety of marine life has begun to call this recycling bin home. This includes non-mobile animals such as anemones and mobile animals, such as crabs.

So, if the litter provides homes for these creatures, isn’t it helpful to have more marine litter? Hard substrates, such as rocks or bottles, are not endemic (or native) to the soft sediment sea floors. The undisturbed soft sea floor has many indigenous (or native) animals, such as Polychaetes (sea worms). These soft-sediment-loving animals could be outcompeted by new, hard-substrate-loving species given an increase in litter. This would lead to the loss of native, soft sediment species and possibly their local extinction.

Plastics can be rafts that float on the surface of the ocean and transport alien (non-native) species from one place to another. Upon sinking to the sea floor or landing on a new coastal environment, the rafts introduce the benthic ecosystems to alien organisms. An early British Antarctic survey found that human litter doubles rafting opportunities for animals, providing an opportunity to disperse to new lands potentially invasive species. A more recent study by researchers in Oregon focused on a tsunami that occurred in 2011 after an earthquake in East Japan. This tsunami triggered a massive transoceanic rafting event, in which 289 Japanese coastal marine species traveled thousands of kilometers to the shores of North America and Hawai’i. The large rafting event was in part attributed to the nonbiodegradable objects, primarily plastics, that were predominant components of the rafted debris from Japan. New species continue to arrive on rafts to the North American shoreline after nearly 6 years at sea. This is a 4 year longer rafting event in comparison to past studies, in which biodegradable litter, such a fallen trees, were the rafting agents. Biodegradable rafts, such as downed trees, are decomposable, making them much less likely to travel across the ocean for many years to land in foreign coastal environments. These rafts result in the arrival of alien species to the North American and Hawai’ian coastline and benthic environments. The potential for plastics to be agents of colonization by invasive species is therefore concerning.

Above: Two examples of plastic rafts that crossed the oceans after the 2011 earthquake in Japan. Left) A shipping vessel heavily covered in Japanese fauna including barnacles and mussels. Found in Washington. Right) A buoy with limpets and oysters attached. Found in Oregon. Photos: Carlton et al. 2017.

Invasive species can disrupt a benthic ecosystem in many ways. They can alter the dynamics of a sea- floor community by competing for space or food resources with the local inhabitants. They can alter the food web and the flow of energy by doing so. They can even change the very material on which the ecosystem is built, by turning sandy sea floors muddy! Invasive species can (and have) changed many aspects of a benthic ecosystem, and the plastics only increase their ability to spread globally. Invasive species are important to humans in many ways, and can be quantified economically. For instance, they can put pressures on local commercial stocks of fish or bivalve species, thus reducing yearly harvest of seafood.

Thinking back to the presence of microplastics in the marine world, seafloor-dwelling animals, such as mussels, readily consume the small bits of plastic when filtering the water for plankton and other microscopic creatures. The majority of plastics that these mussels eat are microscopic fibers from our clothing. This is harmful to the animal that eats the small plastic bits as the plastic has been reported to cause harmful blockages or become incorporated into the circulatory system, for instance. This could therefore lead to increased mortality rates amongst the consumers of the plastics. This also directly affects us as consumers, for we generally eat benthic animals, such as mussels, without removing their stomachs. That means, whatever the mussel eats for dinner, a human eats for dinner.

What can we do?

It may seem a haunting or bleak image of plastic consumption and its effects on our local environments. But, the first step toward devising solutions is through education (like reading this blog). Plastic production is hinged on our consumption, so an easy place to start is by reducing (or eliminating) single- use plastic consumption and choosing more sustainable alternatives to your consumed goods. You could also get involved in organizations such as 5Gyres that focus on working with citizens, politicians, and corporations to reduce plastics production and pollution. You could participate in local beach clean up efforts. As we are the sources, we should be the ones to reduce our plastic footprint.

Plastics provide a home to many, but their very presence affects benthic habitats and how the ecosystem functions. It can lead to the colonization of soft seafloors by hard-substrate-loving animals, potentially leading to local extinction of certain soft-sediment-loving species. Plastics can provide long- term rafting opportunities to potentially invasive species, which affects many aspects of the local ecosystem and our commercial seafood industry. They pose a threat to marine animal and human health once broken down into microplastics. And so, we must reduce our plastic footprint by being more conscious consumers of plastic goods. We must work against the saying of “home sweet plastic” and return it to “home sweet home.”