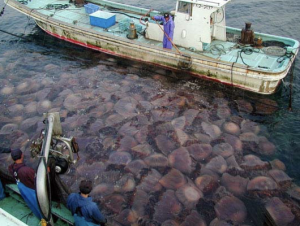 As man’s reach extends across the planet to the detriment of millions of species, select species are taking full advantage of the new territories and food resources. Jellyfish are one of these. And as a consequence, a new picture of their dominance is emerging. Local jellyfish blooms are increasing in numerous locations across the globe. These growing numbers can lead to many deleterious consequences for fishing and aquaculture: killing farmed fish, fouling net pens and causing fish gill disorders, capsizing small fishing vessels, damaging fishing nets, contaminating catches, and reducing commercial fisheries through predation and competition. They clog intakes to the detriment of various industries (desalinization and power plants, mining, military operations, shipping). They cause injury and even death to beachgoers causing loss in tourism revenue and beach closures. To the scientists, jellyfish invasions serve as an indication that oceans are suffering at a magnitude not fully understood.

A suite of human‐induced stresses including overfishing, increased availability of hard substrate in coastal systems through habitat modification, invasive species introductions, eutrophication, and climate change appear to be increasing jellyfish blooms in both frequency and magnitude (Richardson et al. 2009). Although a lack of data makes it difficult for scientists to conclusively say whether jellyfish outbreaks are increasing on a global scale, there have been numerous occurrences of localized increases reported off the coasts of all seven continents.

Although one might think they know a jellyfish when they see one, thousands of species fall under the umbrella of term “jellyfish” – similar only in their body composition and ability to undergo population blooms. Their shared attributes enable them to take advantage and even thrive in highly disturbed and variable environments. Jellyfish are able to reproduce both asexually (offspring that arise from a single organism) and sexually (offspring come from two parents). Although reproduction varies among species, most coastal jellyfish have a benthic larvae stage known as ‘polyps’, where the larvae are attached to the seafloor. These polyps bud more polyps, and many jellyfish can come from a single polyp. Swimming jellyfish (medusae) reproduce sexually and produce many larvae which settle on the seafloor to become polyps. Therefore, jellyfish are able to multiply quickly relative to competitors, which serves to their favor after a disturbance such as bottom trawling wipes out entire communities from the seafloor. Jellyfish are also fierce predators who consume both zooplankton (also consumed by fish), ichthyoplankton (fish eggs and larvae) and small fish; thus their increasing numbers limit fish by exploiting their food source and direct predation.

There has been increasing pressure to find innovative uses for jellyfish as a means of controlling their populations – from utilizing jellyfish for medicinal products to developing microplastics filters from jellyfish mucus. However many of the proposed solutions do not require large amounts of jellyfish. 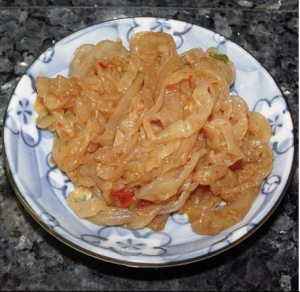 What to do? Open your mouth. Indeed, the largest use of jellyfish is human consumption, and jellyfish fisheries are expanding worldwide as a result.

Consumption of invasive or nuisance species as a means of population control is not a novel idea. Albeit not common menu items, the markets for fishing invasive species such as Asian carp in the Great Lakes and lionfish in the Caribbean Sea and western Atlantic Ocean are steadily growing. And what more – China and other Asian countries have already perfected the art of jellyfish cuisine. Jellyfish has been consumed both regularly as well as on special occasion such as holidays, weddings and other celebrations in China since 300 AD. Malaysia and Indonesia established jellyfish fisheries around the mid‐twentieth century and Thailand and the Philippines followed suite in the 1970s. Within the last few decades, various Asian countries have initiated jellyfish fisheries, and to keep up with the growing demand, jellyfish fisheries have more recently expanded around the globe, primarily for export to China and Japan.

Although catch data for jellyfish remains scant as many countries fishing for jellyfish do not report their catches to the Food and Agricultural Organization of the United Nations, a recent estimate indicated 19 nations are currently fishing for jellyfish with estimated landings of at least 900,000 metric tons annually as of 2016. And why not? Exploiting an unwanted, abundant resource that is wreaking havoc on industry and the environment seems justified. The demand placed on exploited fish such as Atlantic cod and bluefish tuna is causing a risk for irreversible recovery. It seems crucial to alleviate that demand towards a ‘nuisance’ species. Moreover, jellyfish often contain collagen, which can be used to treat arthritis and visible signs of ageing, as well as glycoproteins, used in cosmetics, and food additives and in drug manufacturing.

A recent paper, “We should not assume that fishing jellyfish will solve our jellyfish problem” published in the ICES Journal of Marine Science, explores the debate behind the expansion of jellyfish fisheries as an adequate means to control their populations. While it may be enticing to exploit this growing unwanted resource for consumption, it might not be the most cost‐effective or ecologically‐sound option. Jellyfish abundance is unpredictable and populations can vary drastically from year‐to‐year making it difficult to invest in infrastructure to support the growing fishery.

Another barrier is that fishing jellyfish is only a short‐term management solution. Fishing would target medusae, free swimming, sexually reproducing jellyfish, which are derived from benthic polyps. Removing medusae from the water column won’t eliminate jellyfish from the area, as the polyps will continue to reproduce. And most attempts of eliminating polyps have been largely unsuccessful. 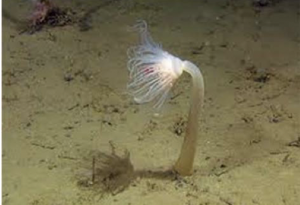 Even if fishing of medusae could reduce a jellyfish population, the ecological implications are unknown making it a dangerous endeavor. Despite jellyfish blooms’ trending headlines, jellyfish are largely understudied and removing them from a system could injure other species. Studies have shown jellyfishes’ versatile role in an ecosystem, including acting as “habitats” and nurseries for juvenile fish and as agents for carbon sequestration. Jellyfish have been found to prey on dominant species, enabling less competitive species access to resources thereby increasing biodiversity.

While there is optimism in the developing market of jellyfish, we should be careful not to see this as an all‐ encompassing solution. Although the apparent drivers of jellyfish blooms, such as overfishing and climate change, are global issues, their effects vary widely on a local level. Consequently, management of jellyfish blooms should be made on a case‐by‐ case basis. Given that the drivers of the jellyfish blooms appear to be inter‐correlated and act synergistically, a straightforward solution might not be intuitive.

Before investing and expanding jellyfish fisheries on a global scale, a word of caution is advised. There are far too many unknowns to assume that fishing jellyfish will only reduce jellyfish numbers without impacting the wider ecosystem. Additional research is needed to explore jellyfish life cycles and their larger roles in the marine ecosystem. And most importantly, the problem will continue to exacerbate itself unless we take a step to learn from and combat the human‐led drivers that initiated the problem in the first place.