Global warming and climate change: four words that we have been hearing a lot in the past years, and that big round question comes up: is global warming for real? Some believe it is a hoax “created by and for the Chinese to make United States manufacturing non-competitive”. Scientists say this is the warmest year since 1880. But let’s back up a little, what is really Global Warming?

It is a fact that Earth’s climate changed throughout the history, with cycles of glacial periods and warm periods depending on how much solar radiation the Earth gets. And we might think that the warming we are experiencing is just another warm period and it’s a natural process. However, scientists have been able to gather information on a global scale through satellites and other improving technologies that shows that this time the warming rate is much faster and unprecedented over decades to millennia.

And they found out that the greenhouse effect is fastening this process. Some of the energy from the sun is trapped in the atmosphere because of gases that absorbs that energy and re-emit it in all directions – the ones called greenhouse gases. Without these gases the Earth’s surface would be 30°C colder, but with more of them, it gets warmer. Carbon dioxide (CO2) has the highest contribution to the greenhouse effect, and its concentration in the atmosphere has been increasing since the pre-industrial period. All living beings release CO2 when respiring, but the primary source of that increase is fossil fuels usage by humans. Because this specific CO2 is not derived from a natural biological process we call it as anthropogenic. Higher concentrations of CO2 increase the amount of energy trapped in the atmosphere and, therefore, the temperature. This is what is called Global Warming or Climate Change.

I hope you are convinced that the climate is changing and that the increased concentration of anthropogenic greenhouse gases is the cause of it (which means… yes, WE are driving it), so I will keep going and we will dive deeper into it. The oceans are a great sink for the extra heat in the atmosphere. Because of its physical-chemical properties, ocean waters can take up 1,000 times more heat than the atmosphere. Thus, if the atmosphere is getting warmer, the oceans are also getting warmer. But it is not only about temperature, the gases on the ocean and on the atmosphere are in equilibrium, which means that if the concentration of a certain gas increases in the atmosphere, it will also increase in the ocean. Remember CO2? Absorption of increased levels of atmospheric CO2 by the ocean has and continues to change pH levels, making the oceans mores acid, a process we call ocean acidification (OA). Intergovernmental Panel on Climate Change recent scenarios predict that ocean pH will decrease by 0.3 units and temperatures will increase by 2.6-4.8°C by 2100. These have huge implications on marine life.

But what do crustaceans have to do with this? Increases in temperature and CO2 changes the availability of specific carbonate species that incorporate many marine invertebrates’ exoskeletons. For example, the saturation state of calcium carbonate will decline, i.e., it will be more soluble, and it will be harder for animals to form their shells and skeletons. Studies have shown that OA affects negatively a broad range of marine calcifying organisms, by changing its survival rates, calcification, growth, development and abundance. Crustaceans, however, have varied responses; some show reduced growth, others show no effect, or even enhance growth under OA conditions. OA has the potential to affect both precipitation of calcium carbonate and the availability and uptake of specific ions necessary for carapace formation. But still, little is known about the functional responses of crustaceans to OA. The exoskeleton is critical for protection from predators and from the environment (e.g. desiccation), resistance to mechanical loads both from predators and preys, and support for mobility. Alterations in its properties may significantly affect the fitness of crustaceans. 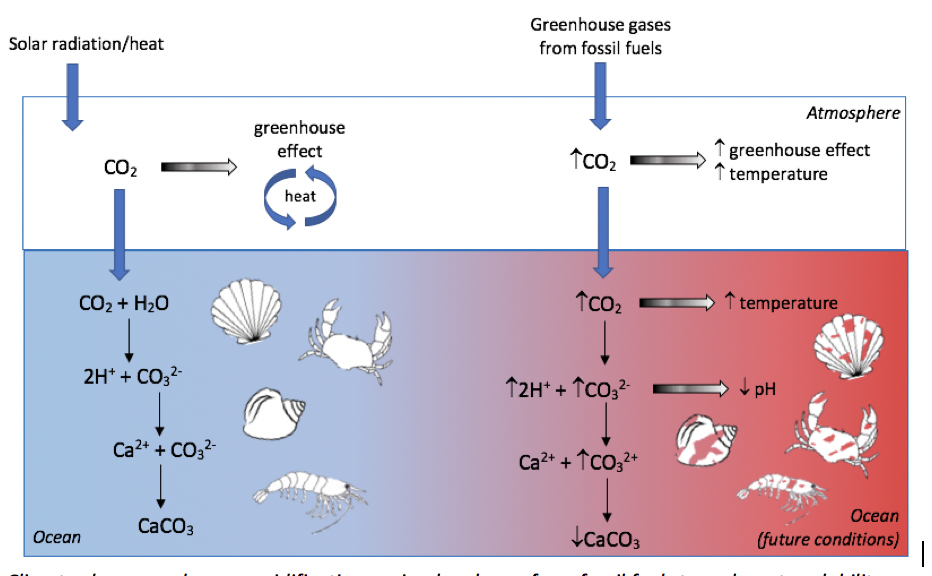 Scientists have been trying to assess the extent to which OA and temperature affects functional properties of decapods (roughly defined as crustaceans with ten legs, as crabs, shrimps, and lobsters). A very interesting study with blue king crabs and red king crabs from Alaska hypothesized that under low pH or elevated temperature, the resistance of their carapace would be reduced due to reduced mineral content of carbonate and a protein called chitin, main constituents of crustaceans’ exoskeleton. NOAA and New Jersey researchers exposed for a full year juvenile blue king crabs to three levels of pH, an ambient level two reduced levels. Juveniles red king crabs were exposed for 6 months to an ambient pH level and a reduced level at three levels of temperature (ambient and two warmer conditions). They then measured the hardness, thickness, and chemistry of the carapace and claw of the animals. They also checked daily for mortalities and molts (when crustaceans change their exoskeleton), recording it and removing it.

For both crabs, the hardness of the carapace did not significantly change among treatment groups, but their claws showed lower hardness in lower pH. For the red king crabs, temperature also did not change total hardness, although the thickness of their carapace was negatively affected. Finally, they verified a significant effect of pH on chemistry, with more calcium (Ca) content on lower pH for blue king crabs. For red king crabs, both pH and temperature had a negative effect on magnesium (Mg) content, which contributes to the hardness, and a positive effect on Ca content in the claws. If we put all these results together we get a situation where the crabs are expending more energy to build their claws due the increased amount of Ca content (remember that OA increase calcium carbonate solubility, making it harder to precipitate it) with lower hardness, and a thicker carapace. Those alterations in mechanical and chemical properties of the claw and carapace affects crabs’ fitness.

If you know something about king crabs, you are probably thinking that this could be just a very specific response since king crabs are mainly found in Alaskan waters and this. Blue crabs, though, are distributed across the western Atlantic Ocean, and they were also the target of a study. The authors aimed to examine the effect of increased temperature and CO2 on the carapace thickness and chemistry of juvenile crabs from Chesapeake Bay. They also exposed the crabs to different treatments: temperature representing summer conditions, with a value of CO2 just below the average for the area, and predicted future conditions (warmer with higher CO2). Each treatment was replicated twice, and crabs were sampled after two molts (27-39 days).

They verified a significant effect of temperature on thickness, with thinner, lighter carapaces associated with higher temperature. Those crabs also contained lower Ca content, showing a significant effect of temperature on it. The carapaces of crabs at high CO2 were heavier and contained more Mg, with a greater effect at high temperature. The Mg:Ca ratios were higher at high CO2, which is an indicator of reduced fitness. Again, OA can decline carapace thickness and change its chemistry. Blue crabs, though, are able to cope with changes in ions fractions in seawater, as they can form their new carapace inside the old one in a controlled environment. However, some specific chemical reactions during calcification process still make it harder for crabs to calcify carbonates, meaning there is still a huge energy cost for it.

Although king crabs and blue crabs have different life histories and distributions, both studies agree that OA has effects on carapace formation, and it seems that there are species-specific responses.

Ok, but why should I care? Take a closer look at the pictures again. Do you recognize them? Let me show you a different view then…

From simple to more complex dishes, king crabs and blue crabs are part of many seafood restaurants menu, and we can easily find them on markets. In 2011, 10,520 tons of red and blue king crab were captured, and the average final product price stays around $10.00/lb. We can then calculate a price for the king crab fishery of more than $210 bi in 2011. According to Alaska Seafood Marketing Institute, in 2016, wholesale prices for red king crab were 25%-35% higher, and this increase, despite a strong U.S. dollar, indicates a strong demand. Considering this increase in demand and prices, we would expect a market value of more than $262 bi in 2016. Most of the Alaskan king crab goes to U.S. and Japanese markets, but we can find them everywhere in the globe.

However, market values are only the economic output of fisheries, and, to get a better grasp of how much money is involved in fisheries we also have to consider the costs of employees, operating and production, maintenance, and transport. For example, NOAA’s report gives us the following costs for the year of 2014: crew share of $31.81 mi, captain share of $14.41, processing labor payment of $8.99 mi, bait expenditures of $1.47 mi, fuel expenditure of $ 3.8 mi, and imports at a value of more than $180 mi.

Blue crabs are also a huge commercial fishery, that has been historically centered on the Chesapeake Bay, and is increasing in other regions. In the U.S., it is of significant culinary and economic importance, particularly in Louisiana, North Carolina, Chesapeake Bay, and New Jersey, even becoming Maryland’s largest fishery. In 2013, its national market value was of $192 mi, and in 2016, 49.6 mi pounds of blue crabs were harvested only from Chesapeake Bay.

Summarizing everything from climate change to crabs’ market… scientific studies help us understanding the whole picture of the possible impact of a changing climate on economically valuable species, which is crucial to determine the future state of the environment. Changes in thickness, hardness and element content of those crabs’ carapace can have huge impacts on their mobility, feeding mode, protection, fitness and, therefore, survival. With a lower survival rate, their stocks will experience a decrease, having a direct effect on the national and world economy. Not even to mention their biological value and the need of management, given the fishing number, that could be a whole another article. And it is not only about crabs, we still have shrimp, lobster, oyster, and clam fisheries on top of that, which will all be also affected by OA. Economic losses of an eventual disappearance of such animals is just a fraction of the real impact in the whole planet ecosystem. So next time you read something like “U.S. leadership is indispensable to countering an anti-growth energy agenda that is detrimental to U.S. economic and energy security interests” on developing clean energy, keep all that in mind.

FAO report on capture production by species, fishing areas and countries or areas for king crabs and squat-lobsters from 2002 to 2011. http://www.fao.org/tempref/FI/CDrom/CD_yearbook_2011/root/capture/b44.pdf

Garber-Tonts, B, and Lee, J. (2016). Stock assessment and fishery evaluation report for the king and tanner crab fisheries of the Gulf of Alaska and Bering Sea/Aleutian Islands area: economic status of the BSAI king and tanner crab fisheries off Alaska. Seattle, WA. https://www.afsc.noaa.gov/REFM/Socioeconomics/SAFE/crab_safe/Crab_Economic_SAFE_2015.pdf

Glandon, H. L., et al. (2018). Counteractive effects of increased temperature and pCO2 on the thickness and chemistry of the carapace of juvenile blue crab, Callinectes sapidus, from the Patuxent River, Chesapeake Bay. Journal of Experimental Marine Biology and Ecology, 498, 39-45.