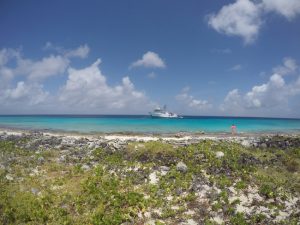 Explorer on the shore of uninhabited Klein Curaçao with R/V Chapman in the distance. Credit: Uncharted Blue

On August 27 a team of scientists and explorers will travel aboard the R/V Chapman to the uninhabited island of Klein Curaçao as part of a series of oceanographic expeditions designed to document the health and biodiversity of shallow and deep reef ecosystems. The expedition will explore the mesophotic zone — the furthest the sun can penetrate the ocean. “These areas are at the cutting edge of coral reef science as they are very poorly studied and are often made up of species of corals, fish and invertebrates that are totally new to science. It is becoming increasingly clear that mesophotic reefs are diverse and serve many critical ecosystem functions yet they are threatened by many of the same stressors as shallow coral reefs including coral bleaching, ocean acidification and sedimentation. It is essential that we better understand how deep mesophotic reefs function so that we can develop strategies to protect them before it is too late,” says Dr. David Kline, a lead scientist on the expedition and Research Biologist at UC San Diego’s Scripps Institution of Oceanography.

This will be the inaugural expedition in a series led by Uncharted Blue, a new organization, founded by CMBC Alumni.  Uncharted Blue connects adventure seekers with world renowned scientists and marine technology to fuel exploration of uncharted ocean destinations.